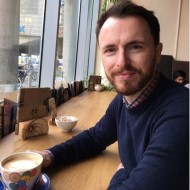 We are delighted to announce that Dale Maskell has been appointed as our new Chief Executive Officer.

Dale, who was appointed in January and officially took up the post on Monday 24th April, joins from LGBT foundation where he was Director of Operations, responsible for management and solutions across Insight, Services, HR, performance and organisational change.

Dale brings with him a wealth of knowledge and experience having previously worked as an Outreach Worker in Salford, then moving into the Civil Service and spending over five years as CEO at Citizens Advice Trafford, before moving to LGBT Foundation.

Dale is keen to build on the digital capabilities of Age UK Cheshire and explore how the organisation can ensure that it reaches out to those people who find services difficult to reach.

John Webb, Chairman of the Trustees commented' We are delighted to welcome Dale to the team, he brings with him a wealth of experience, real enthusiasm and we are excited for the future of Age UK Cheshire '

Dale commented: “I’m really excited to be joining a skilled and inspiring team of staff, trustees and volunteers who are dedicated to enhancing later life for people in Cheshire”

Dale takes over the position from Ken Clemens who stepped down at the end of 2016.