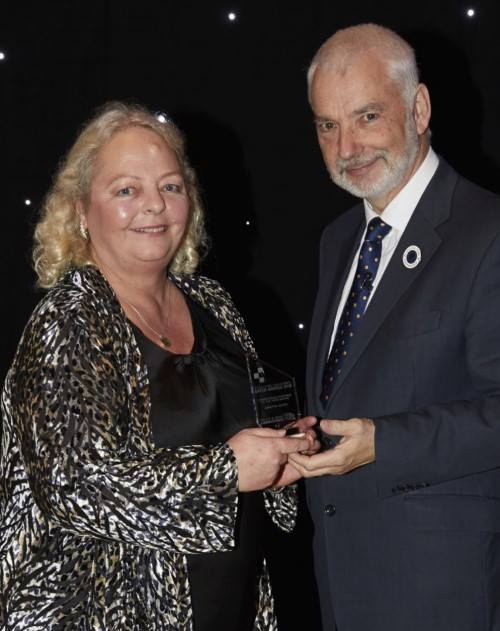 An Isle of Wight volunteer has scooped a prominent award, recognising her outstanding contribution to policing, and in keeping the community safer.

Annette Lester received the ‘Commissioned Partner Volunteer of the Year’ award from the Office of the Police and Crime Commissioner (OPCC) at a glittering ceremony at Winchester Guildhall. Annette volunteers for the Restorative Justice project, which is funded by the Hampshire & Isle of Wight OPCC and run by Restorative Solutions in partnership with Age UK Isle of Wight’s Good Neighbour Scheme.

The Restorative Justice project brings together those who have been impacted by crime, conflict or anti-social behaviour, with those who were responsible. This enables all parties to play a part in repairing the harm done, and finding a positive way forward. The project is particularly effective for resolving issues involving older Islanders who become victims of crime, by making them feel safe in their communities once again.

Annette was overwhelmed by her triumph; “I knew that I had been nominated, but didn’t think for a minute that I would win! It was a wonderful event, and so lovely to see such a range of people, young and old being nominated and winning awards for their volunteering, and the support they provide to PCC projects.

“I get so much out of my work with the Restorative Justice project; it’s such a valuable scheme on both a professional level, but also on a personal level. It is so affirming seeing people overcome the negative feelings they have about a situation and beginning to see themselves no longer as ‘victims’.”

Mark O’Sullivan, Team Leader for Age UK Isle of Wight’s Good Neighbour Scheme commented, “Annette is an unsung hero who never seeks recognition for what she does. We regularly receive positive feedback from partners and service users about her high standard of work, and she spares no effort to support victims of crime. Her contribution to the OPCC Restorative Justice project on the Island is nothing short of outstanding”.