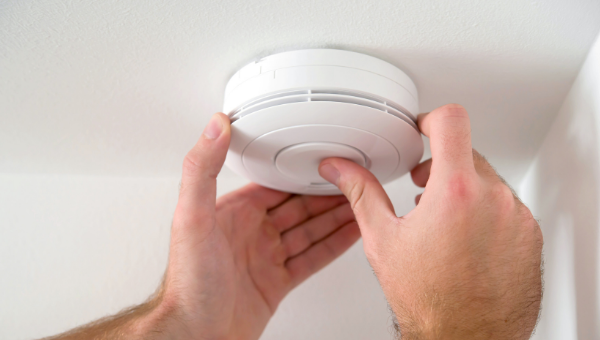 Age Scotland is calling for a two year extension - to February 2023 - to the deadline for homeowners to install interlinked fire and smoke alarms, to give enough time for the 1.5 million homes across Scotland to comply with the Scottish Government’s rules.

The national charity for older people also believes that a significant financial support package is needed to support homeowners on low income who are unable to afford to meet the new requirements.

The requirement for interlinked fire and smoke alarms in owner-occupied homes was originally announced by the housing minister, Kevin Stewart MSP, in February 2019 with a deadline of 1 February 2021.

Following the public outcry in October 2020 about a lack of public awareness, the cost implications for people on low and fixed incomes and concerns about the impact of COVID-19 restrictions on the availability of support with installation, the Scottish Government have sought to extend the deadline by one year to February 2022.

The charity’s call comes ahead of a debate in the Scottish Parliament on Wednesday (16 December), led by Scottish Labour’s Sarah Boyack MSP about the considerable challenge homeowners face meeting these new standards.

The housing minister will also be appearing at the Local Government and Communities Committee to discuss the issue.

A recent survey by Age Scotland highlighted that homeowners were largely unaware of these rule changes - 82% of respondents said that they became aware of the need to install interlinked fire and smoke alarms since October, three months from the original deadline.

A third of all respondents only became aware of the requirement when they read Age Scotland’s survey.

As well as extending the deadline by two years, Age Scotland believes that the Scottish Government should:

“There is no doubt that good home fire safety standards are vital, but it is clear from calls to our helpline and our recent survey that huge numbers of homeowners have been completely blindsided by the change in the law which requires them to install these new fire and smoke alarm systems.

“There has been a considerable level of anxiety and confusion from people seeking advice about the short time frames for compliance, the cost and affordability, where to get support to install these devices, the risk of scams and rogue traders, and how it will impact their home insurance policy.

“Large numbers of homeowners still don’t think that they will have enough time to afford and undertake this work. Much of the information that has been made available by the Scottish Government has appeared since October and is online which has been less that helpful for the half million over 60s in Scotland who don’t use the internet.

“It would make sense for the housing minister to reset the clock on this legislation and delay the deadline by two years.

“The Scottish Government’s estimated cost of installing these devices also seems on the low side compared to the quotes people have been sharing with us, the added costs if you need the help to have them fitted and conflicting information in their own documentation. This needs further review and demonstrates why financial support is needed for the hundreds of thousands of households on low income.

“We are grateful to MSPs from all parties in the Scottish Parliament for their support on this issue and for helping to develop the range of measures for homeowners which we would like the Scottish Government to adopt.”

“People over 60 face some of the toughest choices. They are more likely to be found to be in fuel poverty than any other age group. Their health and wellbeing is so important and anything that takes away from their ability to heat their homes or cook their food needs far more careful consideration than is currently the case.

“Energy costs are rising; homes are not becoming efficient quickly enough and incomes are flat or falling. Households need to be helped to meet these important safety standards especially as people under pressure often feel forced to make very poor choices.

"This should not be one of those pressures. Incentives, and capped costs for installations underwritten by Government are needed to level the playing field. Support for local, trusted organisations can help ensure that the message reaches everyone and can help them make the best, safest and most affordable decisions.”