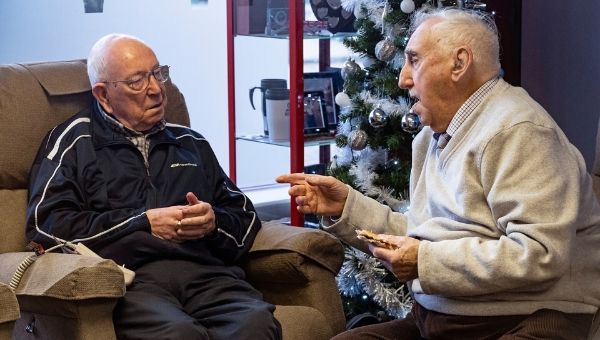 Veterans Minister applauds the "remarkable and positive impact" of Unforgotten Forces as he announces major Scottish Government investment for it to continue to 2023 under Age Scotland's co-ordination.

Unforgotten Forces, the groundbreaking consortium of armed forces and civilian charities working to boost the health and wellbeing of older veterans in Scotland, has started a new phase with a fresh funder and a changeover of leadership.

A new investment of £750,000 by the Scottish Government will enable the consortium to continue its work up to March 2023, beyond the original 3-year funding of £4 million from HM Treasury via the Aged Veterans Fund.

Age Scotland, the national older people’s charity, has taken over responsibility from Poppyscotland for co-ordinating the 15-strong consortium. Poppyscotland had led Unforgotten Forces to award-winning success since 2017 with its delivery of more than 13,000 episodes of support to older veterans.

Unforgotten Forces will continue to provide older veterans in Scotland with practical support, health-related support and information and advice, arts engagement opportunities, as well as opportunities to enjoy friendship and camaraderie to help counter loneliness and social isolation.

Strong joint working relationships and sustainability plans developed in the initial three years will enable the consortium to continue to work effectively with a reduced level of funding. Not every partner is receiving a share of the Scottish Government funding, but all will continue to work closely together to ensure older veterans are aware of and can access support from the consortium, and that support to them is seamless.

“Being part of Unforgotten Forces has been a tremendous boon, enabling Age Scotland to boost its support for veterans at a time when more than half of them are age 65 and older. It’s an honour to take over the role of Unforgotten Forces co-ordinating partner, and I’d like to thank Poppyscotland for its capable stewardship to date.

"I’m also delighted that the Scottish Government has recognised the value of collaboration between veterans and civilian charities and invested to ensure our consortium can continue to enhance later life for Scotland’s veterans.”

“Having established the Unforgotten Forces consortium and secured the initial funding, we have been delighted to see the impact it has had on the lives of so many older veterans over the past three years. Partnership working lies at the heart of Poppyscotland’s approach and it is especially pleasing to have seen so many like-minded organisations join forces in this ground-breaking way.

"An older veteran reaching out to one of its partner organisations means they are, in effect, reaching out to all partners in the consortium. This approach was recognised when the consortium received the 2019 ‘Soldiering On Award’ for enduring commitment and collaborative approach to supporting the sector within the wider community.

“Age Scotland have been one of the leading lights of Unforgotten Forces to date and we look forward to playing a very active role in supporting them as they lead the consortium forward in the years ahead. Many more older veterans need our collective support and while there is much success to celebrate, there remains more work to be done.”

“The work the Unforgotten Forces charities are doing for Scotland’s community of older veterans is having a remarkable and positive impact and I have great admiration for them.

“I’m delighted we have been able to confirm the Scottish Government’s provision of £750,000 of funding in support of the consortium over the next three years. The excellent nature of the projects now being co-ordinated through Age Scotland shows just why that was so important.”

1. Online information about the Unforgotten Forces consortium is available at www.age.scot/unforgottenforces

2. Members of the Unforgotten Forces consortium are:

3. The Scottish Government funding for Unforgotten Forces will be disbursed between 1st October 2020 and March 2023 as follows:

The Hearing Forces project will continue to support to older veterans on issues surrounding hearing loss, hearing aids and tinnitus, transitioning gradually from a staff-led to a volunteer-led service.

DMWS addresses the non-medical aspects that affect the physical and mental well-being of veterans in healthcare pathways.  The funding represents a contribution to the cost of delivering its services in the Fife, Lanarkshire, and Borders NHS Health Board areas.

Fares4Free coordinates and provides free transport for older veterans, helping to combat loneliness and isolation and providing access to important services and social opportunities.  The funding represents a contribution to the cost of delivering the service.

Legion Scotland will continue to provide community-based befriending and comradeship support to older veterans in order to counter the loneliness and social isolation that many experience.  The funding represents a contribution to the cost of delivering the service.

4. On 5 April 2019 the Unforgotten Forces consortium was announced winner of the ‘Working Together’ category at the 2019 Soldiering On Awards ceremony in London. The Soldiering On Awards recognise the outstanding achievements of those who have served their country, and the diverse people and groups who work together in support of the Armed Forces Community. The award, sponsored by the Forces In Mind Trust, was presented by Lt Gen Richard Nugee, Chief of Defence People.

5. In 2017 there were an estimated 220,000 UK Armed Forces veterans in Scotland, amounting to 9% of veterans in Great Britain and 5% of all household residents in Scotland.  It was also estimated that more than half (129,000; 58%) of the veterans residing in Scotland were aged 65 and over. [The Strategy for our Veterans: Taking the strategy forward in Scotland: Scottish Government January 2020]