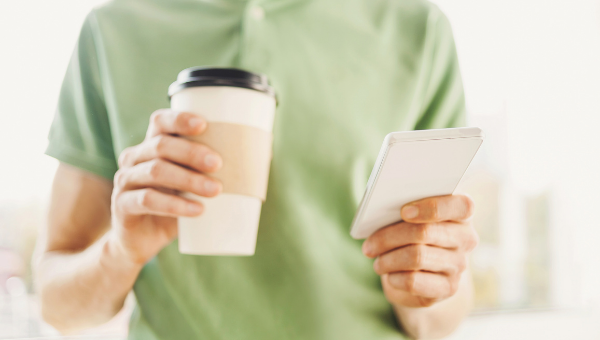 Age Scotland is urging businesses not to exclude older, less tech-savvy customers in the push towards digital and card-only payments.

As many high-street shops, cafes and restaurants re-open their doors today (APRIL 26), the charity says there is a need for greater awareness and consideration of older customers who don’t have access to a smartphone.

Chief Executive Brian Sloan has written to the Scottish Retail Consortium and Scottish Licensed Trade Association warning that more than half a million older people risk being left behind as they cannot use digital payments.

The charity's helpline has already heard from callers, including those living with dementia, who have been refused takeaway service because they did not have access to a smartphone app.

Many popular café and restaurant chains, such as Costa and Wetherspoons, are encouraging customers to order through a smartphone app as part of Covid-19 safety measures. Other businesses are urging card-only payments where possible.

In addition, nearly 6,500 venues in Scotland have signed up to the new Check in Scotland contact tracing app, which allows customers to quickly give their details by scanning a QR code.

While digital payments and contact tracing can be safe and convenient, figures from the latest Scottish Household Survey suggest around 600,000 people aged over 60 do not use a smartphone. In addition, around 140,000 Scottish adults do not have a bank account.

“Covid-19 has already had a devastating impact on older people. Not only have they borne the brunt in terms of physical health, but it has seriously exacerbated Scotland’s existing epidemic of loneliness and isolation.

“Now that restrictions are easing and the end is finally in sight, many understandably wish to go out and socialise again. Something as simple as meeting a friend for coffee can be a huge boost for someone’s mental health and wellbeing if they have been feeling alone.

“We understand why businesses have put in place additional health and safety measures to protect staff and customers at this time, including a preference for cash-free transactions. However, requiring customers to order via an app risks excluding large numbers of older people who do not have access to this technology.

“The latest figures from the Scottish Household Survey indicate that almost 600,000 people over 60 do not use a smartphone. In addition, around 140,000 adults do not have a bank account, adding an additional barrier to cash-free transactions. Even among smartphone users, many people with older models still struggle to download and use an app.

“Scottish hospitality is known the world over as being welcoming, and we are sure that businesses won’t want to intentionally exclude anyone.

“As we take steps towards a recovery together, it is vital that no one is left behind and those most impacted are supported to play a full part in society again.

“We are urging all businesses to consider their older customers and make sure that there are alternative ways to book, order, and pay for those who don’t have the latest technology.”