Blog: Championing the rights of older people in Dumfries and Galloway 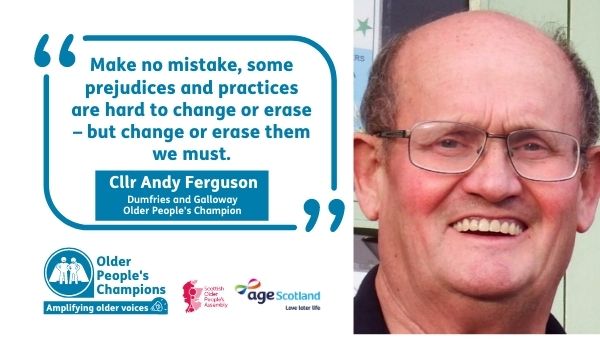 Councillor Andy Ferguson is the Older People's Champion in Dumfries and Galloway. He is fully committed to furthering the rights and welfare of older people and ensuring that their needs are at the heart of decision-making in his local area.

Born in the Scottish Borders I left home, like so many of my friends in the mid-sixties, and the cultural difference was immense. No longer cocooned in a warm, close community as a young police trainee I was quickly made aware that the big bad world outside Kelso was a different place entirely.

My work eventually took me to Glasgow, where amongst other things I was the police presence on the Priesthill/Nitshill initiative which was set up to fight urban deprivation. That really opened my eyes and gave me a perspective that poverty, be that relative or abject, can take many shapes and forms. I would say that this period really changed my life and philosophy.

When I left the police, I went back to college and returned to Kelso where I rekindled a relationship with my childhood sweetheart Ann. Ann was Age Concern Scotland’s Development Officer in Scottish Borders and went on to hold key national roles within the charity, in particular securing the Adult Support and Protection (Scotland) Act 2007, which protects older people from abuse. I have no doubt that her experience helped influence me. She told me “don’t ever say the elderly, its older people” and I have never forgotten that advice.

Work then took both of us to Dumfries & Galloway and the rest is history.

I worked for the local authority in Social Work and latterly in Education before retiring in 2012. That year I became one of the first serving Council Officers in Scotland to be able to stand in local elections. Being successful meant I was required to resign on the spot!

In my first term I chaired the Social Work Committee for a time and served as co-chair of our local Older People’s Consultative Group or OPCG. During my time, this Group were truly a voice for change, and were very involved in some major contributions on social policy. I was also the rotating chair on the advisory joint committee to oversee the formations of the first Integration Joint Board.

On to 2017 and I was successfully re-elected to represent Ward 6 (North West Dumfries) and was appointed as Chair of Communities Committee, onto the IJB (which I currently Chair) and as the local authority representative on NHS Dumfries & Galloway. These three portfolios gave me a much better understanding of the cross-organisational work in Dumfries and Galloway. I was elected, with unanimous cross-party support, late in 2019 as Older People’s Champion.

The pandemic has curtailed my role, and my influence has been a wee bit less obvious as services and the population have had to come to terms with a rapidly changing world and much of my early intentions have had to be reviewed. Currently a priority is to ensure older people are receiving the services, support, and protection they need. Very recently we have started the engagement process for our new IJB strategic plan and commissioning intentions, as well as launching a transport review.

This work is ongoing, although somewhat delayed because of the recent COVID spike, but I am committed to ensuring services for older people are as good as they possibly can be. They deserve no less.

I am committed to the re-introduction of the Older People’s Consultative Group, perhaps in a local form, with an umbrella group for the region. After all, whilst there are universal issues – such as pensions – our region is a diverse one and what might be a priority in Stranraer might not necessarily be a priority in Langholm. That work will be overseen by older people themselves as we engage with them as a key stakeholder group. This will be my primary emphasis for the rest of 2021 and into 2022.

I am also working within the Council, Health Board, and Integrated Joint Board to ensure the voice of older people is heard and more importantly listed to. Focus will be on health inequalities, access to services, transport, and how we will take forward services into the next step of our journey including the new priorities set out in recent public health changes.

As a new member of SOPA I am looking forward to working with new people and have subscribed to Age Scotland’s newsletters and policy updates and for that I thank them. It is reassuring that we have such a vibrant, widely respected, organisation like Age Scotland looking after all our interests.

The job is not an easy one and when I retire as the Chair of the IJB in just a couple of months I will be spending the new time available to me working to further the rights and welfare of older people.

Find out more about our Older People's Champions campaign