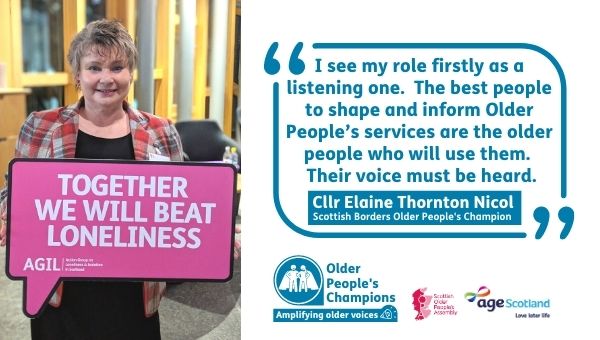 When I was elected as a councillor in 2017, I had been employed for 16 years in the voluntary sector, the last four specifically managing services aimed at improving the lives of older people, so I suppose I was the best choice when Scottish Borders Council was looking for nominations for the Older People’s Champion.

This role is ambassadorial, authority-wide, non-political - and an honour.

There is no budget line attached to this role so there is no cost to the council.

When I agreed to the nomination, I asked for a role descriptor, because there was no point in me bumbling about the Borders hoping I am doing what is expected of me. Bizarrely enough, there wasn’t one, but one was provided very quickly.

At this point, please remember I was newly elected and had little knowledge of the machinations of my own local authority, let alone the others. I assumed that every council had an Older People’s Champion. I thought I would be able to join the network of 31 other champions, some of whom would be in their second term, who would be able to share their knowledge and offer opportunities to take their learning to the Scottish Borders.

Unfortunately, this is not the case. There are some who have the role but the councillor with the title is not proactive. Some authorities claim to have an Older People’s Officer, but no description of what they actually do. Others again have nothing and no one specifically tasked with ensuring that the voices of older people are heard at every level.

I see my role firstly as a listening one. The best people to shape and inform older people’s services are the older people who will use them. Their voices must be heard.

I work with officers across the council to feedback on various issues and concerns that older people have raised. And I must say they are listening, supporting and, where possible, acting.

There is an aspect of this role that involves sitting in meetings. It could be anything from listening to third and voluntary sector organisations as they try to learn to work more closely, commenting on proposed services, helping others to understand the need to find out what older people need, want, miss and, let’s be very truthful – don’t like.

I’ve been involved in a range of activities in my role so far. These include, among many others:

I am the face of the council to older people, and I am proud of that. I want to be the best voice I can be for them.

At every council meeting, my fellow councillors are used to me referencing an older person in my speeches. I want us to keep our older people at the forefront of our minds when discussing and debating services.

My role also entails supporting the council on campaigns relating to older people – on one occasion I had my photo taken receiving my flu injection to encourage the uptake and thus hopefully prevent illness.

If there was a network of 32 elected members who were proactive Older People’s Champions for their local authority, listening to our older people, feeding through to councils and the Minister for Older People and Equalities, imagine the knowledge and information base we would have. How much faster we could respond.

So here is my challenge to everyone in Scotland:

This is the chance to take the first step on what I know will not be a short journey – change is not easy for any of us.

And lastly, please remember, an Older People’s Champion is not necessarily an older person – they could be as young as me!

Find out more about our Older People's Champions campaign