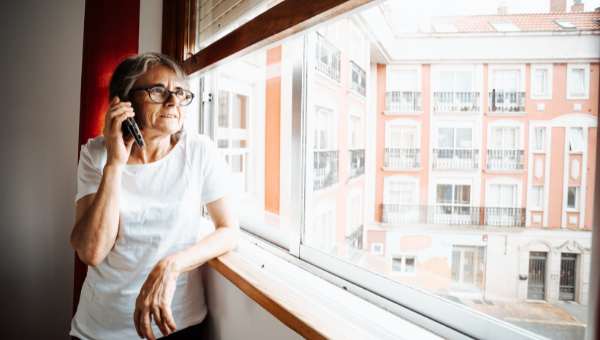 Two thirds of older people living alone say the pandemic has made them lonelier, according to new research by Age Scotland.

Age Scotland is warning of a new “epidemic of loneliness”, as its research reveals the impact of the pandemic on older people.

The data released today (Friday) from the charity’s “Big Survey”, conducted with ScotInform, found that 10 per cent of people over 50 – an estimated 218,000 in Scotland - say they feel lonely most or all of the time.

This figure rises to 17 per cent among those who live alone, an increasing sector of the older population.

More than half of respondants (53 per cent) said that lockdown had made them lonelier, but this rose to 65 per cent among those living alone.

The charity believes that the country needs to get to grips with rising feelings of loneliness before they reach epidemic levels otherwise the health of the nation could be severely impacted.

They are urging people to reach out to those at risk of loneliness in their community, and end the stigma around talking about it.

Its survey found that older women were more likely to be affected, with almost six in 10 (58 per cent) saying they felt lonelier in the past year compared to 42 per cent of men. This could be because they are more likely to live alone, since life expectancy is longer for women.

Interestingly, people in their 60s were most likely to feel lonely (12 per cent) compared to only nine per cent of those in their 80s.

However, a small number of respondents (two per cent) felt that the pandemic had made them less lonely, perhaps because it helped foster a sense of community.

Age Scotland launched its free Friendship Line on 0800 12 44 222 last year in response to the increasing number of older people feeling alone. As well as taking thousands of calls, its staff and volunteers call many older people for a regular chat and to check they are doing OK.

These include David Rollie, 70, a retired ambulance driver from Jedburgh, who found himself living alone after his wife died. He said:

“I lost my wife last year and found it really hard. I wasn’t even able to visit her in hospital because of Covid-19 which made things much worse. All of a sudden the house was a lot quieter. I still miss her every day.

“I was shielding for some of last year, so that meant I wasn’t able to get out and go anywhere. At least I had my dog for companionship, and I’m lucky living down here in the country. I don’t have many friends down here, and I don’t see my son very much.

“I called the Friendship Line as I thought it would be nice to chat to somebody. I think it’s a really good thing – you can talk about anything and get to know volunteers from all over Scotland. It really makes a difference and I enjoy getting their calls.”

“We already knew loneliness and isolation were huge problems among older people in Scotland even before the Covid-19 pandemic. This new research has confirmed our fears that older people are feeling lonelier than ever before.

“Our helpline has taken heart-breaking calls from people across Scotland who have gone days or weeks without hearing a friendly voice. Tens of thousands have only their television or a pet for company, while some even say they feel their lives aren’t worth living any more.

“We need to get to grips with the increasing feelings of loneliness before they get to epidemic levels. This is taking a serious toll on their physical and mental health and well-being. Loneliness significantly increases the risk of heart disease, dementia, and premature death, as well as leading to depression.

“While shielding and lockdown restrictions have helped save lives, we now need action to tackle this epidemic of loneliness and isolation. As we look towards the recovery, we need to redouble efforts to reach those who are alone, and ensure support is there in their communities.

“We can all do our part to help end loneliness, whether by volunteering or simply reconnecting with an older friend, relative, or neighbour. Even just a friendly chat on the doorstep or phone call can brighten someone’s day if they are feeling alone.”