Remembrance is not just about the past 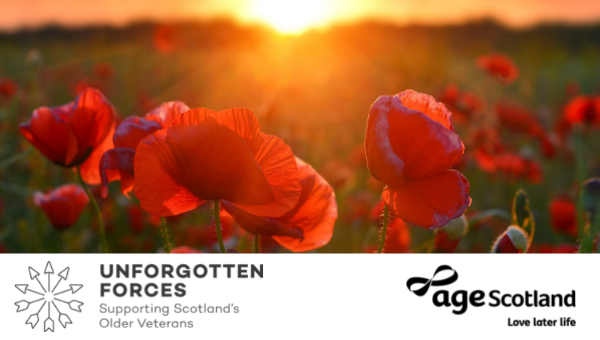 This month is the centenary of the poppy as a symbol of Remembrance for the sacrifices of our Armed Forces.

Haig recognised the potential of these poppies to become both a symbol of Remembrance and a means to support the welfare of ex-Servicemen. He ordered nine million poppies which were sold on 11th November 1921.

Today the poppy appeal is run by the Poppyscotland, which also provides a range of welfare support to Scotland’s ex-service community. The poppy appeal is heavily supported by Legion Scotland, the custodian of Remembrance in Scotland, whose activities also include a Veterans Community Support Service that helps socially isolated veterans reconnect with their communities.

Age Scotland is proud to have worked alongside these charities and others for more than four years as part of Unforgotten Forces, a partnership dedicated to boosting the health and wellbeing of ex-service men and women in Scotland aged 60 and older. Unforgotten Forces matters because more than half Scotland’s ex-service population is in later life.

Amongst them are the remaining World War Two veterans, and a generation of men now in their late 70s and 80s who did post-war National Service. Now entering later life are those who served in Northern Ireland, the Falklands and the first Gulf War.

Remembrance is as much about meeting their needs today as it is about remembering those who lost their lives in the World Wars. It’s also about recognising that everyone who was in the Armed Forces, whether for a long time or short, and whether they were deployed in a conflict or not.

All lost civilian freedoms while serving and were expected to sacrifice their health and even their life if required. Age Scotland publishes a suite of free advice guides for older ex-service men and women, to ensure they know their rights and about additional support available to them.

The Age Scotland helpline 0800 12 44 222 offers free and confidential information and advice to older members of the ex-service community, and where helpful can connect them to services run by Unforgotten Forces partners.

We also offer free awareness training and handbooks to volunteers and paid staff involved in supporting either and both older people and veterans.

The Unforgotten Forces consortium offers a wide-range of support services to veterans in Scotland age 60 and older.