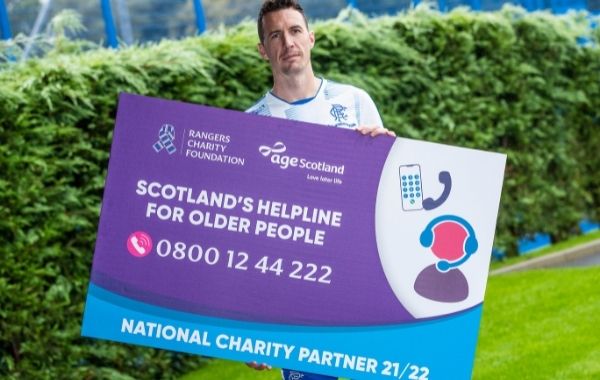 Age Scotland has teamed up with Rangers Charity Foundation this season to tackle the high levels of pensioner poverty in Scotland.

The Foundation today (Friday 22nd October) announced Age Scotland as its National Charity Partner for this season, with the aim of helping more older people access the financial support they are entitled to.

Across Scotland 150,000 pensioners are living in poverty, with the numbers creeping up in recent years.

The Rangers Charity Foundation is pledging £25,000 to Age Scotland which will help support their free national helpline to identify unclaimed social security for older people who call them.

Last year, Age Scotland’s advisors uncovered more than £600,000 in missing support for callers to their helpline. But they know this is just the tip of the iceberg, with at least £400 million in Pension Credit and other benefits like Council Tax Reduction going unclaimed by older people in Scotland each year.

The partnership comes as rising living costs and the ongoing fuel crisis are putting a strain on older households, with a third already living in fuel poverty. There are fears even more older and vulnerable people will be plunged into poverty this winter without the financial support they are entitled to.

However, an estimated four in 10 older people (around 123,000 households) who are eligible for Pension Credit, which would lift them out of poverty, do not claim it. This important entitlement tops up their state pension and supports them with a range of other elements of social security such as help with council tax and household energy costs.

Age Scotland and the Rangers Charity Foundation are urging all fans to check if they or an older friend or relative could receive extra support by calling the charity’s helpline for a free benefits check.

They also want to remove the stigma of talking about poverty and low incomes and boost awareness of the financial support that is available and how to claim it. They aim to empower family and friends to help older people in their lives who could be missing out due to a lack of awareness, inaccessibility or pride.

“We are absolutely delighted that the Rangers Charity Foundation has selected us as their national charity partner. It’s shocking how many pensioners in Scotland are living in poverty or struggling to get by on a low income.

“Teaming up with us this season shows that the Rangers Charity Foundation cares about tackling this and ending the stigma surrounding poverty. It’s clear that there is nowhere near enough focus on the impact of pensioner poverty, which we are committed to addressing together.

“Rangers FC has such strong connections in Glasgow and communities across Scotland and we want their supporters to help us champion the rights of older people and ensure they are all claiming the financial support they're entitled to. There’s a strong link between high levels of poverty and falling healthy life expectancy in Glasgow, and we urgently need to work together to get to grips with this.

“I think people will be shocked to hear that hundreds of millions of pounds in financial support for older people on low incomes goes unclaimed in Scotland every year. Many are missing out because they don’t know about it, find the process of claiming it daunting, or feel too proud to accept help. But they’ve paid into the system all their working lives and deserve to enjoy a decent standard of living in retirement.

“We want people to check in with Age Scotland to see if they or older family members are entitled to social security such as Pension Credit by calling our helpline on 0800 12 44 222 and using our free information guides. People have nothing to lose but perhaps a lot to gain. A quick call could mean more pounds in the pockets of older people and make life easier for someone who is struggling.”

“I was delighted to help announce the partnership between the Rangers Charity Foundation and Age Scotland today. I know the pandemic was really difficult for so many older people across the country and the current issues with energy costs are a worry for many of them, so hopefully this initiative will make life a little easier. The Foundation already does some great work with older people, but tackling pensioner poverty is a really important goal.”

Any older person can call the free Age Scotland helpline for advice and a social security entitlement check on 0800 12 44 222 or find out more at www.age.scot/checkincashout.