The winter weather didn’t dampen the enthusiasm of the scores of older people who attended Age Scotland’s National Hustings on Monday 2nd December. They were raring to go as they grabbed their opportunity to quiz the politicians ahead of next week’s General Election.

The lively audience, who gathered in the Radisson Blu Hotel in Glasgow, were passionate about the issues that matter most to them. They were determined to have their voices heard and get straight answers from the parties’ representatives. This was their opportunity to get their message across to the politicians and they did not waste it. 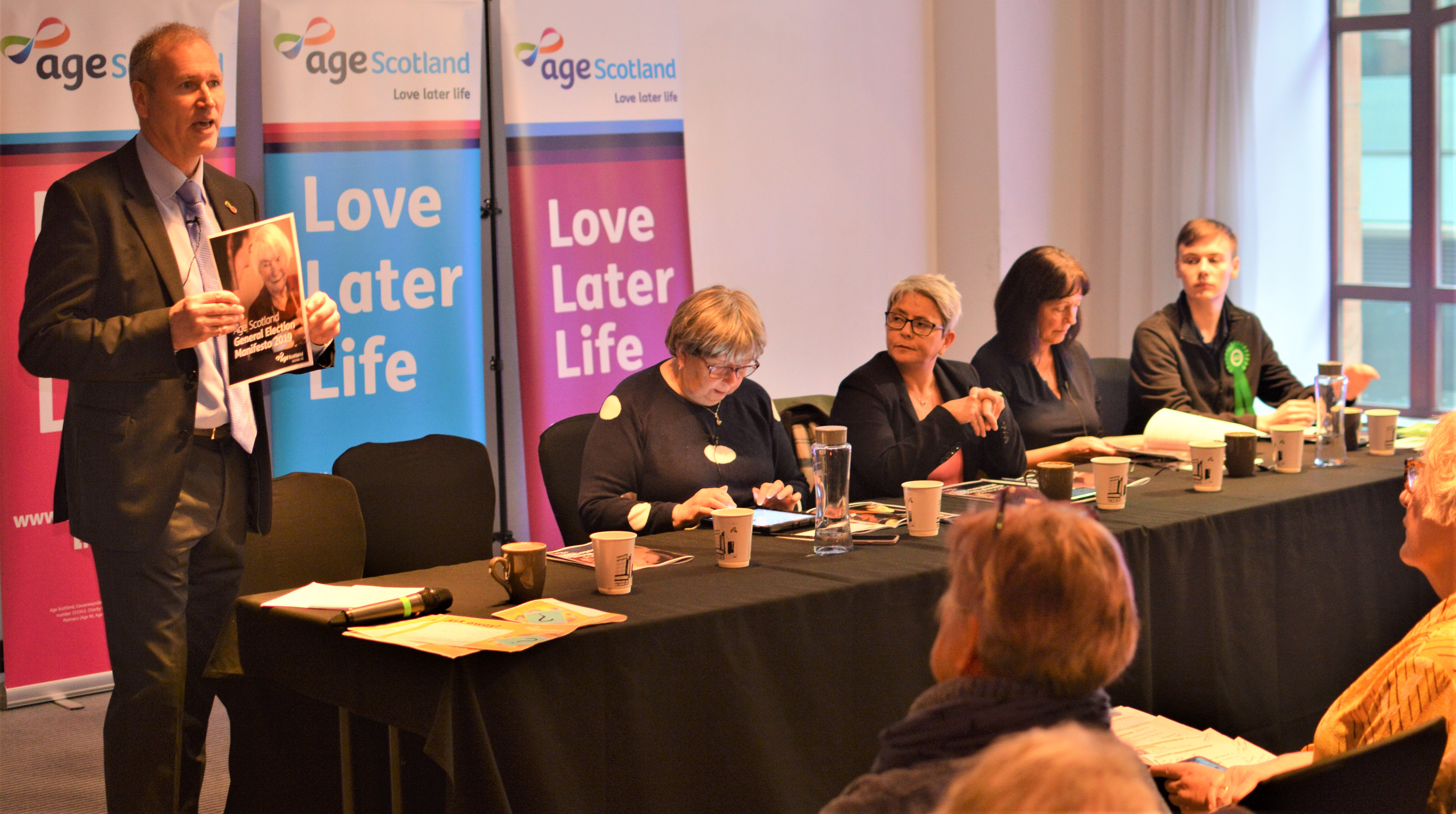 Age Scotland invited all the main parties in Scotland to send a representative to the hustings. Our panel consisted of: Annie Wells, Scottish Conservative MSP, Marion Fellows, who is standing to be SNP MP in Motherwell and Wishaw, Jacci Stoyle, Scottish Liberal Democrat candidate for Inverclyde, and Cameron Glasgow, who is standing for the Greens in Livingston. The Labour representative, Matt Kerr, who is standing in Glasgow South West, was unable to attend the event in time as he was delayed at a previous commitment.

Brian Sloan, Age Scotland’s chief executive, was the fifth member of the panel. He began proceedings by highlighting the issues covered in Age Scotland’s 2019 General Election manifesto, including digital inclusion, access to money, the growing epidemic of loneliness and free TV licences for the over 75s – all of which he hoped the panel would take on board.

The event was introduced and skilfully chaired by Pennie Taylor, journalist and Age Scotland board member, who gave each panel member two minutes to introduce themselves before handing over the event to the audience. 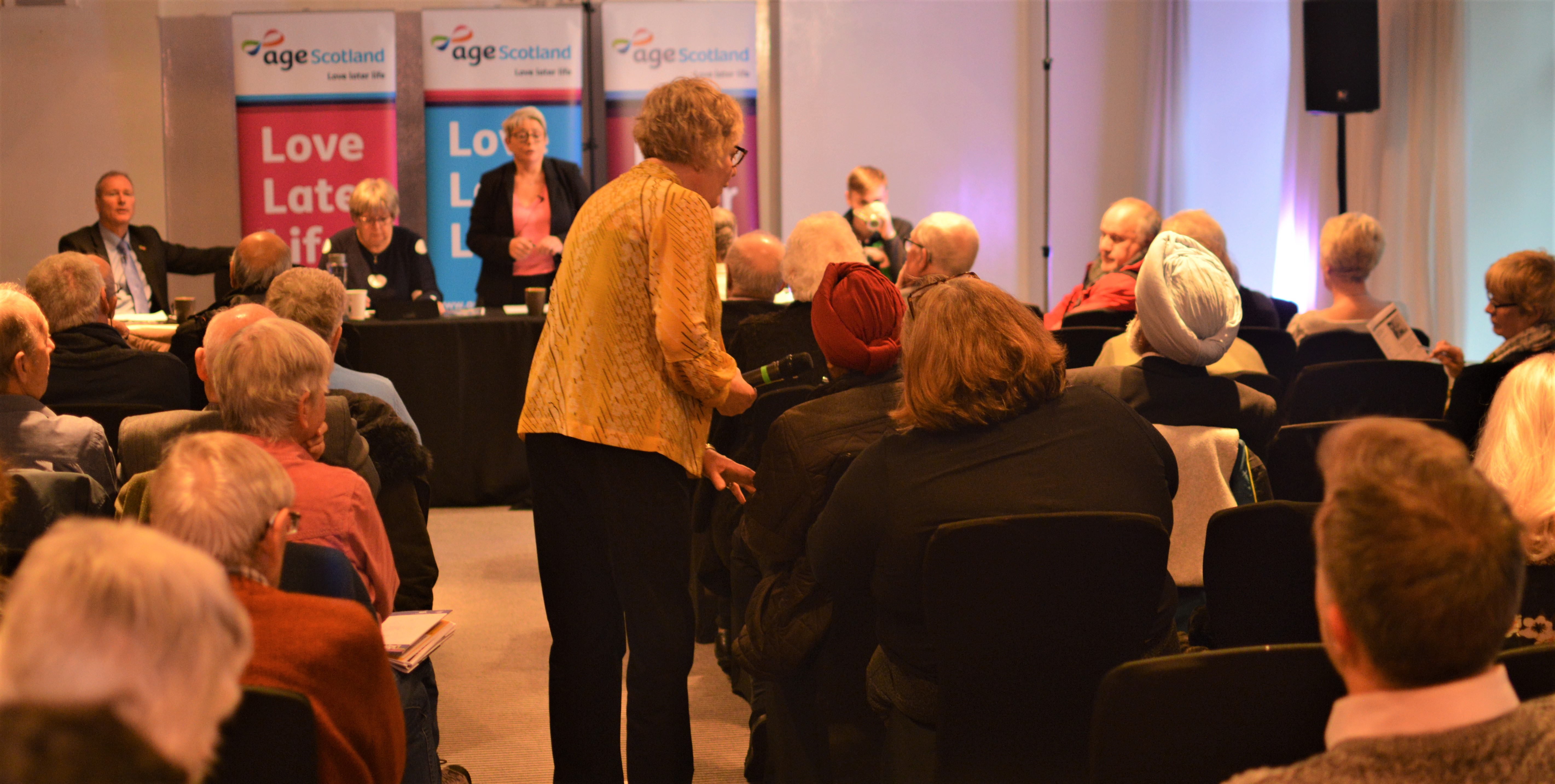 Questions kicked off with concerns about pension disparity, and the suggestion that the gap between older and newer pensioners was growing wider. Each panel member was asked to guarantee the future of the “triple lock” on pensions - the promise of a state pension increase each year - and urged politicians to address confusion surrounding benefits, including pension credit.

Another questioner spoke up for the tens of thousands of unpaid carers over the age of 65, asking the panel if they could name the six principles for carers, enshrined in the Carers Scotland Act, 2016, and covered by Human Rights legislation. None of them could, but all acknowledged the vital role played for unpaid carers across the country.

In a lighter moment, one audience member objected to the term “old people” pointing out that “shoes, buildings and furniture can be old – not people”. His suggestion that older people could be re-branded as “super adults” was greeted with laughter and a round of applause. 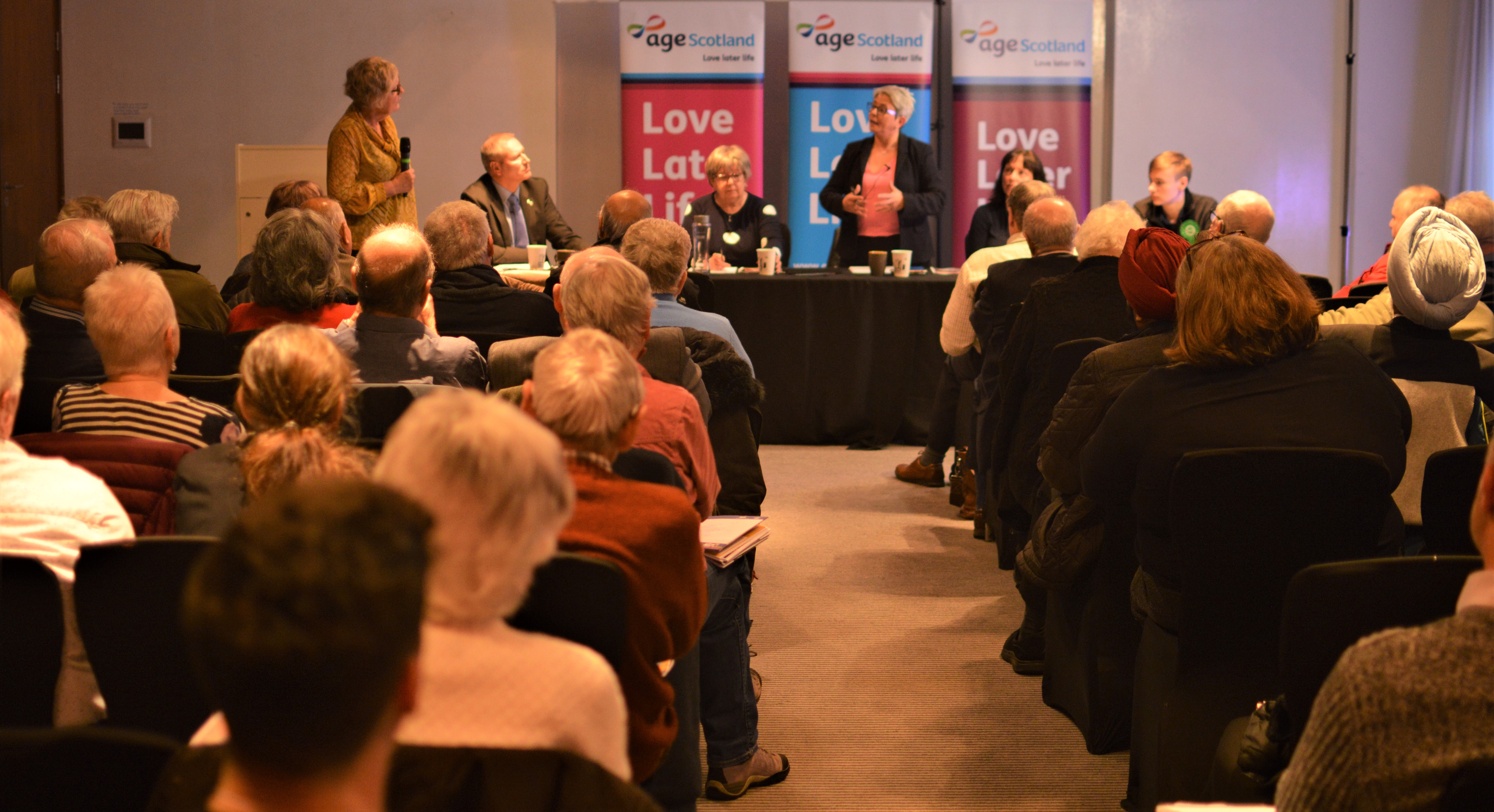 The question Disability Living Allowance assessments came next, with the questioner asking if it was reasonable for older people living with chronic health conditions to be subjected to regular benefits assessments. The feeling was that a GP diagnosis should be enough for someone to qualify for benefits and they should not be asked to “jump through hoops”, as Pennie Taylor put in, with further assessments.

An audience member from the Castlemilk Seniors Centre spoke about the struggle faced by community groups to secure long-term funding. She explained that her community group helps save the health and social care services millions of pounds. There was general agreement from the panel about the importance of supporting community groups, with Brian Sloan pointing out that community groups lie at the heart of Age Scotland with 800 active member groups operating around the country.

The conversation moved on to cover air pollution, public transport, bus passes, rail fares and free and accessible public toilets before a question was asked about access to alcohol services for older people. The revelation that some services have an imposed “age bar” preventing the over 65s from getting help and support for alcohol misuse came as a shock to many of the panellists and members of the audience.

At a time when the only group in Scotland experiencing an increase in numbers drinking over the recommended weekly units are the over 65s, each of the panel members said they would urge their parties to remove the restriction on accessing help. It was noted that there are many reasons why older people may start drinking more heavily, including bereavement, forced retirement and loneliness and unlike younger, more social drinkers, older people tend to drink at home alone – the so-called “hidden drinkers”.

Although the 2019 General Election has been dubbed by some the Brexit election, the subject of Brexit did not dominate our audience’s thoughts. But some of the possible consequences did come up. Questions were asked about staff shortages in sectors with a high number of European Union employees, including the NHS and care services, as well as fears over a shortage of medication if the UK leaves the EU without a deal.

Finally the possibility of developing more inter-generational working was raised with an appeal to the panellists to end the “demonising” of older people. Panel members spoke of wanting to unite the generations and heal divisions. Brian Sloan spoke about Age Scotland’s mission to promote a positive view of ageing and later life.

With that, Pennie Taylor drew the hustings to a close, thanking the panel members for their contributions and thanking the audience for ensuring that the issues that matter to Scotland’s older population will be heard by the people who will form the country’s next government.