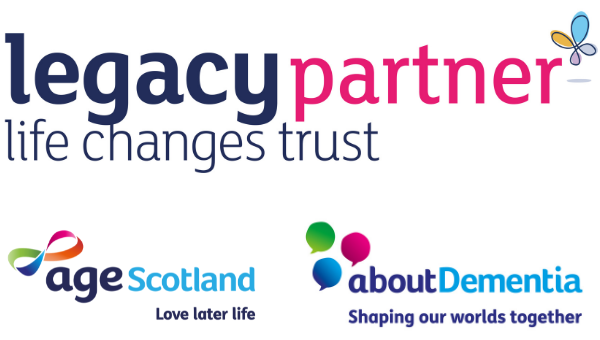 With an estimated 90,000 people living with dementia in Scotland, it’s never been more important to support them – and those who care for them, unpaid – to  live their best lives. This is especially true with that figure predicted to almost double to 164,000 over the next 15 years.

Age Scotland’s About Dementia project, funded by the Life Changes Trust, has already been bringing together people living with dementia, supporting them to help shape policy and practice and having a meaningful say about things that are important to them. The team has worked across Scotland to find out what people living with dementia need to live better lives, covering areas such as transport, housing, human rights and dementia prevention.

Last year, About Dementia was named as one of two “legacy partners”, alongside BOLD (Bringing Out Leaders in Dementia), which is hosted by Queen Margaret University and The University of Edinburgh. BOLD works with a wide range of people, from artists to carers, to help those living with dementia reach their potential.

Now the Life Changes Trust has announced a third part of their legacy which focuses on:
• funding programmes that build on their learning from 'Creating Better Lives' regional grants and Peer to Peer resources for people with dementia and unpaid carers
• hosting their evidence and learning (for example, learning and evaluation reports, other publications, webinars etc.)
• updating the current ‘Dementia: A Whole Life Approach’ boxset online with the development of a second edition
• the transfer of the Trust website

The legacy partner for this will be Age Scotland and About Dementia, who will also carry on their own ground-breaking work when the Trust closes in March 2022.

Brian Sloan, Chief Executive of Age Scotland, said: “This is very welcome news, and a huge endorsement of the work we have done over the past eight years, including About Dementia and our Dementia Training work.

“This funding will ensure that About Dementia’s work is sustainable over the longer term. It will make sure that we can continue to put the voices of people living with dementia and unpaid carers at the core of our work, and campaign for positive changes in policy to support them over the long term.

“We can also continue some of the Life Changes Trust’s work such as learning gained through their regional grants programme, by delivering our own peer to peer grants programme for people living with dementia and unpaid carers.

“We’re also very proud to work alongside BOLD as part of the Life Changes Trust legacy, and look forward to seeing them build on their creative work to help those living with dementia flourish.”

The Life Changes Trust is a charity that was set up in 2013 to support the empowerment and inclusion of people living with dementia, unpaid carers of those with dementia, and young people with experience of being in care.

Arlene Crockett, the Director of Evidence and Influencing for the Trust’s dementia programme, said: “Throughout its lifetime, the Life Changes Trust has been about working at all levels – increasing beneficiary voices; encouraging grassroots organisations; providing evidence to statutory organisations and national government that address the issues most important to beneficiaries. As a time-limited organisation, and now that we are nearing our closure date, we are making legacy partner arrangements so that others can build upon, develop, and improve on our work and evidence to date, for the longer-term benefit of our beneficiary groups.

“Age Scotland has been growing its work in the field of dementia since receiving funding from the Trust for the Early-Stage Dementia project back in 2015. A growing awareness of the different issues faced by people living with dementia is becoming embedded within the organisational culture and is at the centre of the charity’s decision-making process. Age Scotland is an integral part of the strategic legacy collaborative appointed in 2018 by the Trust – Age Scotland, BOLD and About Dementia. This is why we are confident that Age Scotland are the right organisation to lead on this part of the dementia programme legacy.

“More generally, the Trust has developed many partnerships over the years, and this has meant that there is an extensive range of legacy partners to draw upon who will carry our aims, priorities and values beyond the lifetime of the Trust. This will not look identical to the work that the Trust has done to date, but will build upon, develop and expand this work for years to come. We are very much looking forward to seeing what comes next, with Age Scotland as an integral part of our legacy.”