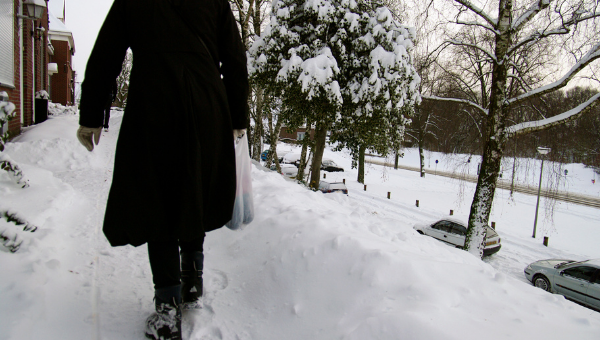 Age Scotland is concerned that tens of thousands of older people could be putting health at risk as severe weather sweeps across Scotland.

Age Scotland is asking people to check on their older friends, neighbours and relatives as much of Scotland faces sub-zero temperatures this week.

Weather warnings are in place in many areas until Friday, with temperatures dropping as low as -16 degrees Celsius in part of the country.

Snow and ice is causing disruption, meaning many older people will struggle to get to their vaccination appointments at health centres, as well as shopping for essentials.

The winter lockdown has led tens of thousands of older people to feel more isolated than ever, with many reluctant to ask for help. But Age Scotland's research found that reaching out could make a big difference, with 94,000 older people saying they would not have got through 2020 without the kindness of strangers.

The charity is also urging older people not to skimp on heating costs, and to make sure they are claiming all the help that is available.

New figures from Independent Age this week revealed that older people are missing out on an estimated £88 million nationwide in Warm Home Discounts, as four in ten of those eligible don’t claim Pension Credit. In Scotland, an estimated 123,000 pensioner households are missing out.

As well as topping up their pension, Pension Credit entitles them to a range of additional benefits which could include £140 of their energy bills. They will also get an extra £25 for every seven-day period of very cold weather over the winter.

Cold weather can have a serious impact on our health as we get older, putting us at greater risk of respiratory illnesses, heart attacks and strokes. Simple precautions, such as heating living areas to around 21 degrees Celsius, having plenty of hot food and drinks during the day, and wrapping up warm outside can reduce the risk.

Brian Sloan, Chief Executive of Age Scotland: “Unfortunately the combination of severe weather and the winter lockdown is creating a perfect storm, putting tens of thousands of older people at risk of isolation and ill health.

“Snow and icy conditions make it difficult to get out for essential shopping or medical appointments, but many are reluctant to ask for help. We’re also worried that many older people will be putting their health at risk by failing to heat their homes adequately.

“We’re urging everyone not to forget about their older relatives, friends and neighbours during this cold snap. Simply picking up the phone or knocking on someone’s door to see if they need a little extra help could make a huge difference, especially if they are feeling isolated and unable to leave their home.

"We know many older people are keen to get to their vaccination appointments this week. But if you're struggling to make it, it's not worth battling the elements and putting yourself at risk - there will be another opportunity.

“We’re also encouraging every older person to make sure that they are claiming all the benefits they are entitled to. Older people are at greatest risk from cold temperatures, but also more likely to experience fuel poverty. It’s simply unacceptable that tens of thousands are struggling to pay their fuel bills or turning their heating down to save money, especially when help is available.

“Our friendly helpline advisors can quickly check if you are missing out on Pension Credit and Warm Home Discounts by calling 0800 12 44 222.”