As a child, I was extremely lucky to spend a lot of time walking and climbing in the Lake District with my family. So, when I saw an Ultra Challenge would be taking place on my old stomping ground, it was too good an opportunity to miss!

Travelling up on the Friday with my family, I was nervous in the same way many `Challengers’ often are before these events… “Will my feet cope with the conditions?”, “Will my legs get me up the hills?”, “Will I be able to keep going when it’s pitch black, and I’m on my own?”  But, as every Challenger knows, there’s only one way to find out, and that’s to simply get out and do it!

Starting at 9am on the Saturday morning, it was a beautifully sunny day, and a perfect temperature for walking… not too warm, and with a slight breeze. It wasn’t long before I felt at home, following a stony path through the middle of a stunning Lakeland valley, sheep-laden hills rising either side, as a trail of hikers marched through the middle soaking up the atmosphere. 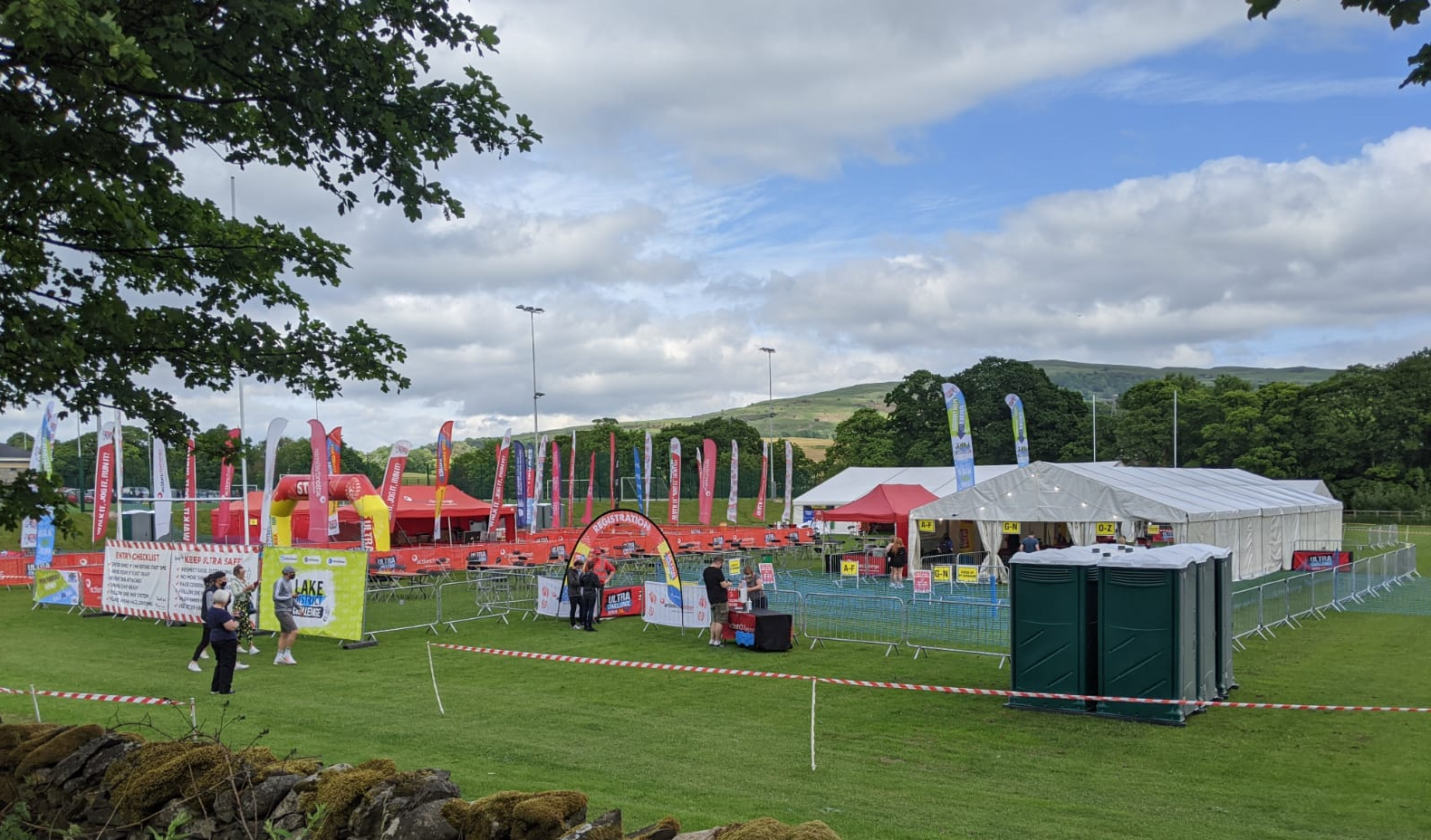 In no time at all though came the first of the steep climbs to tackle, helped by the chance to refuel beforehand at the Old Deer Park rest stop, 12.5km into the walk. Rising up sharply 140m, and with the temperature increasing, it was the first real test and had many stopping to `admire the view’ several times on the way up!  If that wasn’t enough to sap the energy, the slightly less steep, but longer 260m of further ascent shortly afterwards certainly brought on the jelly-legs for many! The undulating gradual descent into Ambleside, with its extra water stop for those suffering from the heat, was a relief by contrast, and the 1st quarter rest point a welcoming sight.

On Ultra Challenge events, the rest stops can be the only things that keep you going! Well stocked with food and drink, they’re an essential chance to top up on both, and if you’re suffering, to be patched up by the medical team. I can’t speak highly enough of the staff and volunteers who help challengers achieve their goals, many of them working 24-hour shifts until the last participant crosses the finish line. Absolute stars, every last one of them. 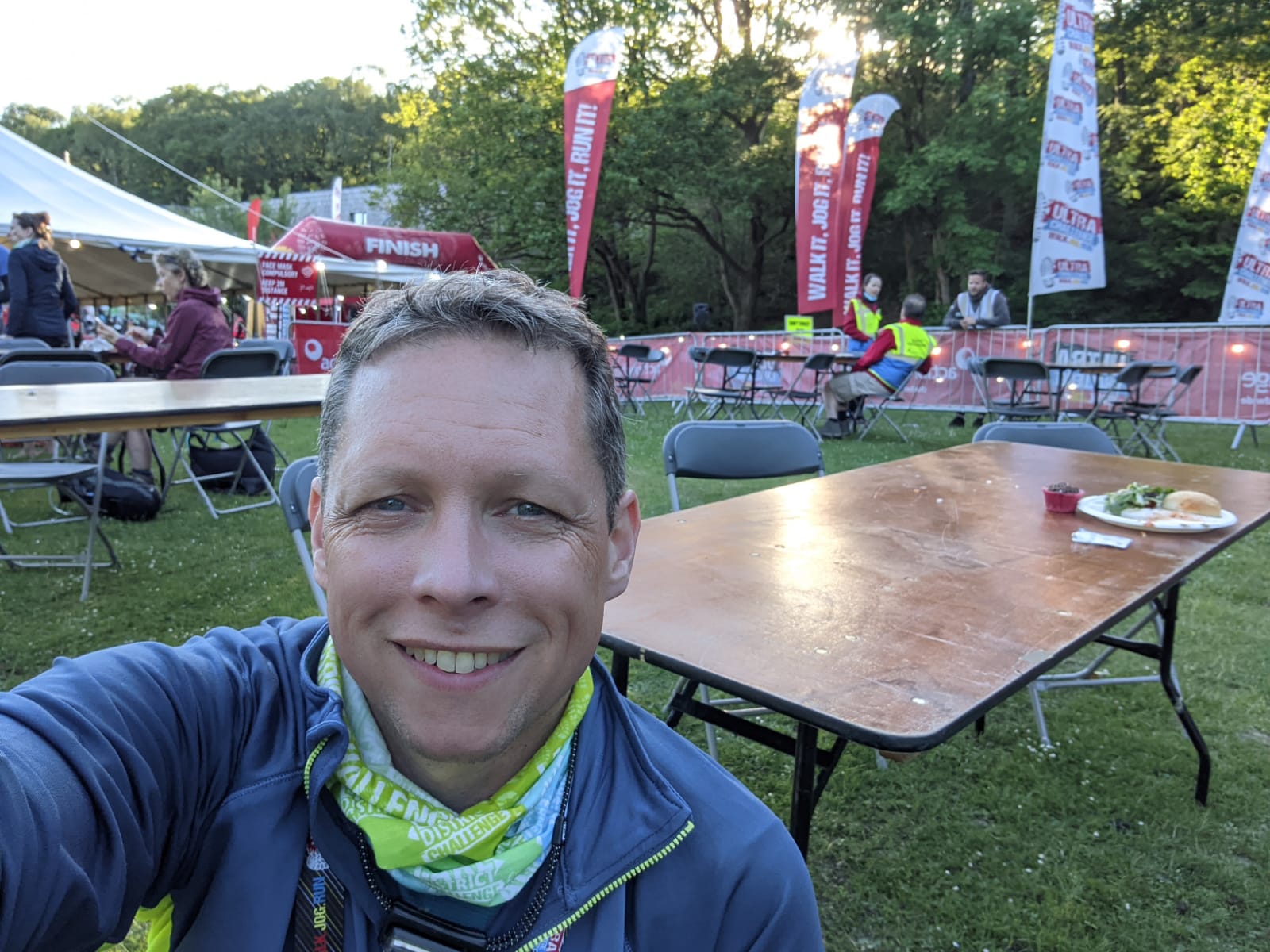 After a short break, and with fresh socks on and water topped up, it was time to set off on the next leg, to the half-way point at a YMCA centre on the shores of Lake Windemere. This second section was no less beautiful, meandering through stunning scenery in the countryside west of the lake, through forests, alongside rivers, and past smaller lakes. However, with the heat of the day now at its peak, it was a huge relief when the route turned back towards the shoreline of the lake and the cooler breeze brought some respite. Seeing the boats on the lake, with people jumping in and swimming in the cool water, it doesn’t take much imagination to know how tempting it was to join them!  I managed to resist though and ploughed on, up another steep climb to the third rest point in the village of Far Sawrey, and onto the 50km halfway point where my wife and children (or the Support Crew, as they were known for the day) waited. 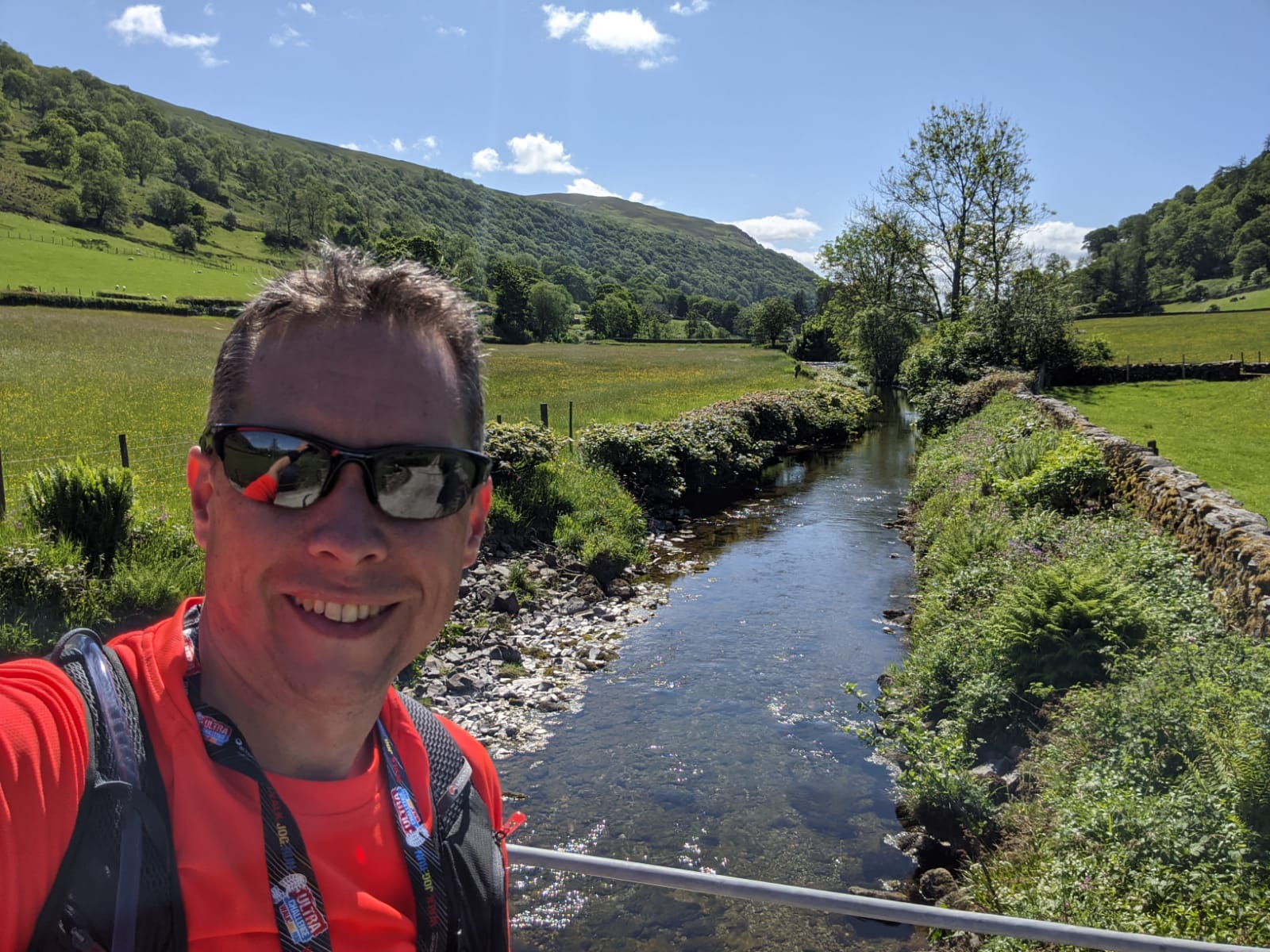 The night section on challenges always brings an element of the unknown. Firstly, the most unsettling feature is the complete loss of any sense of direction – in the dark, you’re unable to see any landmarks you would use during daylight to judge where you are. Your world shrinks to the reach of your head torch… more on that later.  The second unknown is how you are going to cope with the tiredness, and the pain you are very possibly going to be experiencing by then. You might have noticed that is two uncertainties and not one, but that is because the two of them often go hand in hand.  The more tired you are, the more difficult it is to push through any pain. And the more in pain you are, the more it takes all your energy to keep going. I remember passing at least two people who were stumbling like zombies, fighting so hard to get to the next rest stop, but who, despite their best attempts to sound upbeat, could not disguise the mental and physical pain they were enduring.

And so it was I started into the night, uncertain of what it would bring, but already feeling bruising and potential blisters in some areas on my feet.

At about the 64km mark I met up with the man who, as it turned out, would become my walking buddy, and my saviour, to the end of the Challenge. Rick was someone I’d set myself the target of keeping up with during the walk to that point. It hadn’t always been possible but having caught him at the halfway point and shared a meal with him, I knew he would be good company. I wasn’t wrong... 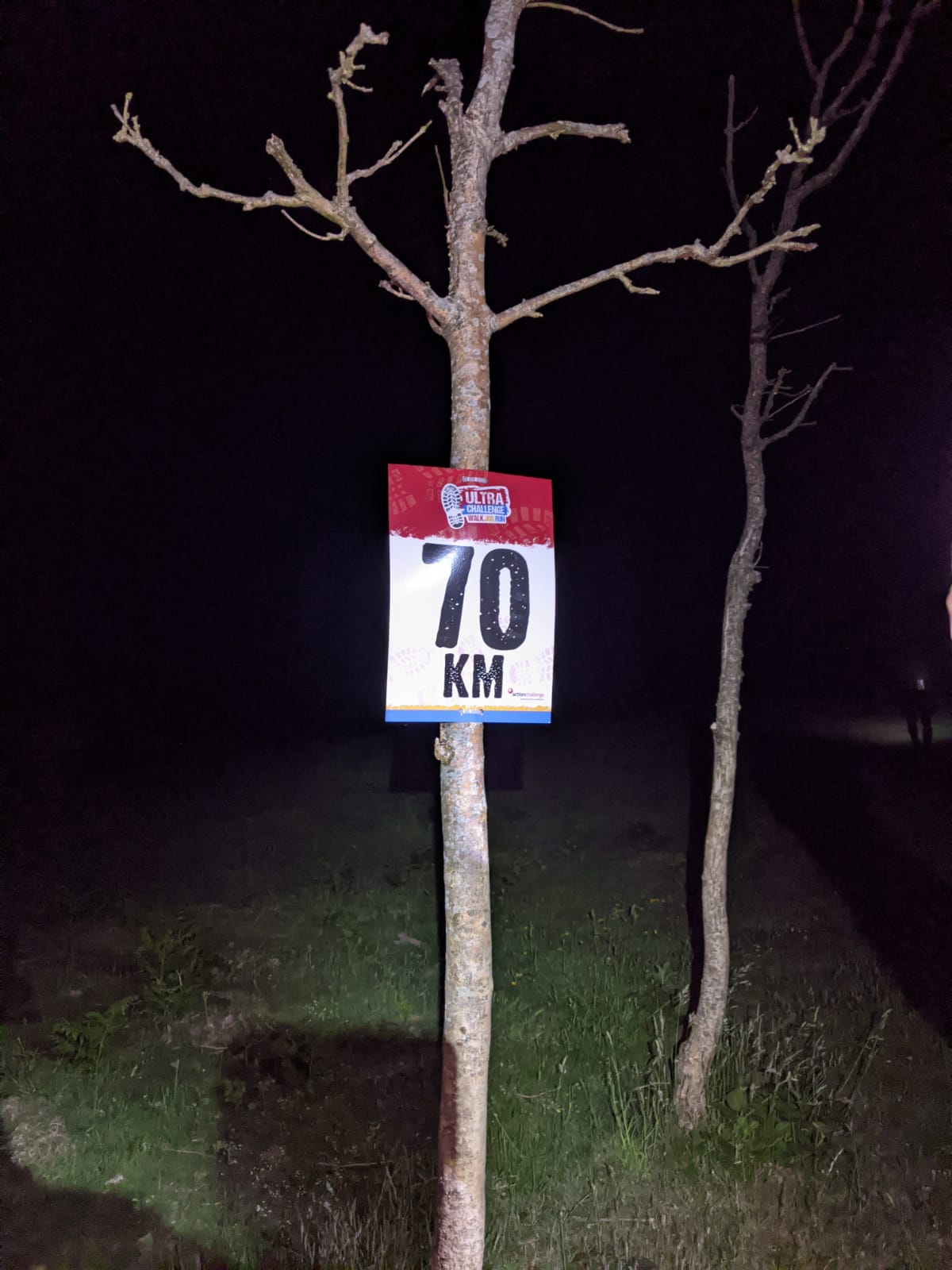 You might recall, in the uncertainties I listed above I mentioned the need for a good head torch. Quite simply, you can’t do without one, and the organisers will pull you out of the challenge faster than most people refuse your invitation to join you on one in the first place! So, you can imagine my horror when after 73km, and at about midnight, my torch began blinking and then turned off. No longer was I entirely self-sufficient, and after many long months of training, and the huge effort put in on the day so far, I was in the dark, facing the prospect of staying where I was until natural light improved.

Or I would’ve been if it hadn’t been for Rick. Together we walked closely enough for me to share his beam, putting my own torch back on when approaching rest stops, for the brief moments before it would conk out again, so I wouldn’t be discovered! Without him, I would’ve been reliant on a rapidly dying mobile phone, but together we walked until daylight broke at about 4pm and I could see for myself once again.

But it wasn’t just Rick’s head torch that helped me keep going.  When he asked if I’d like some music whilst we walked, I agreed it would be a great idea. What he didn’t mention was that, along with the music speaker, he’d brought flashing lights! And so, to those residents of the quiet Lakeland villages we passed through in the early hours of the Sunday morning, I can only apologise for the mobile disco!

And that sums up what an Ultra Challenge is often about. Many start out with an individual goal, whether that is to complete the route in a particular time, or simply to reach the finishing line. But, no matter how individual you feel at the outset, you can be certain that’ll change. Whether it is the incredible Action Challenge staff and helpers you find along the way, or whether you are lucky enough to find your own Rick, you will never feel alone, and at no stage will you meet anyone who isn’t willing you to do the very best you can. 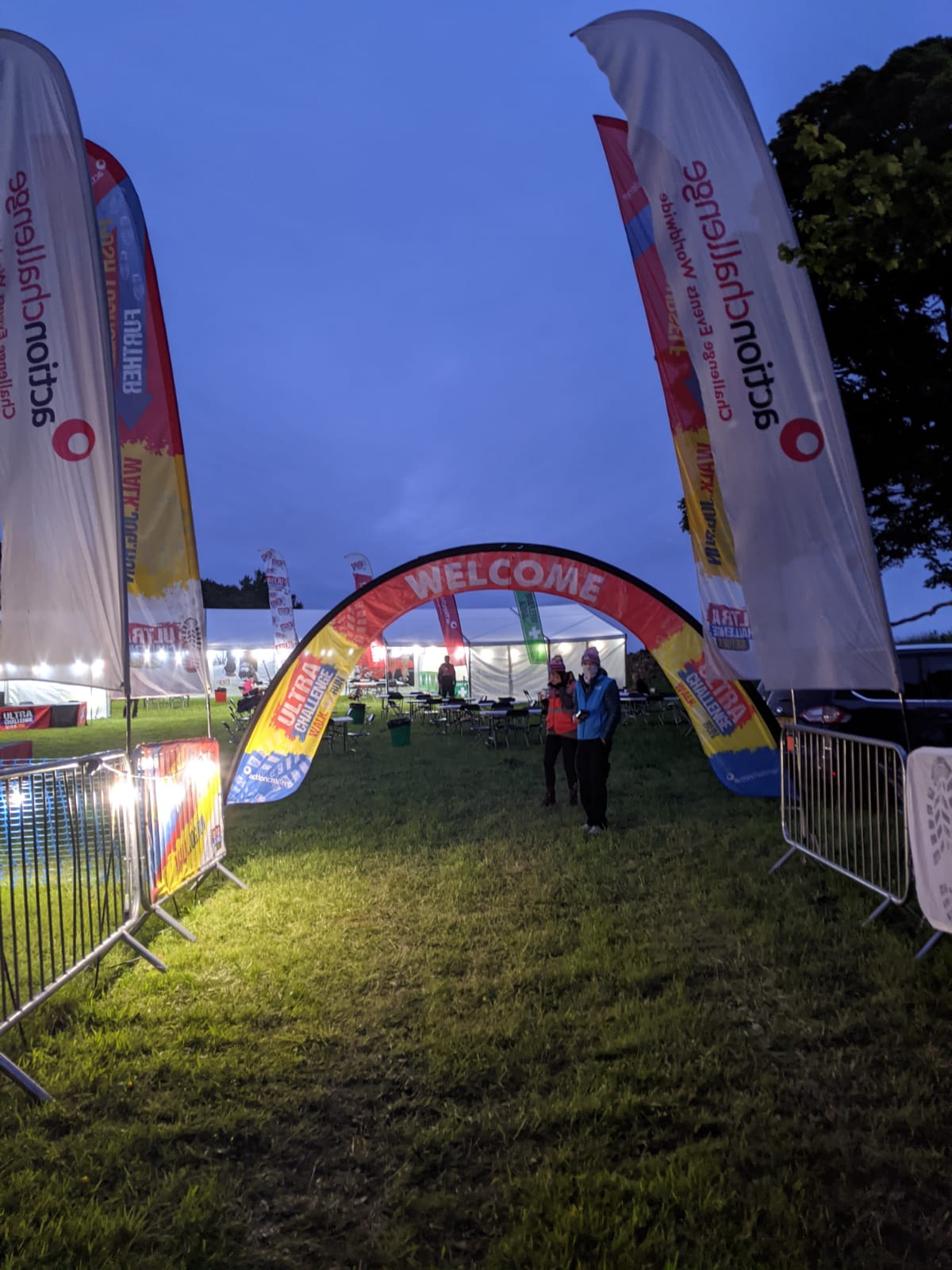 Since completing the challenge, I have read various accounts from other seasoned participants, and many consider it the toughest Ultra Challenge in which they have ever taken part. The last 14km in particular were punishing, an extremely stony path being the last thing the feet needed when they were already bruised and blistered from 90km of walking. But, with determination, and mutual encouragement from my walking buddy, I made it to the finish line and to my fantastic waiting support crew. 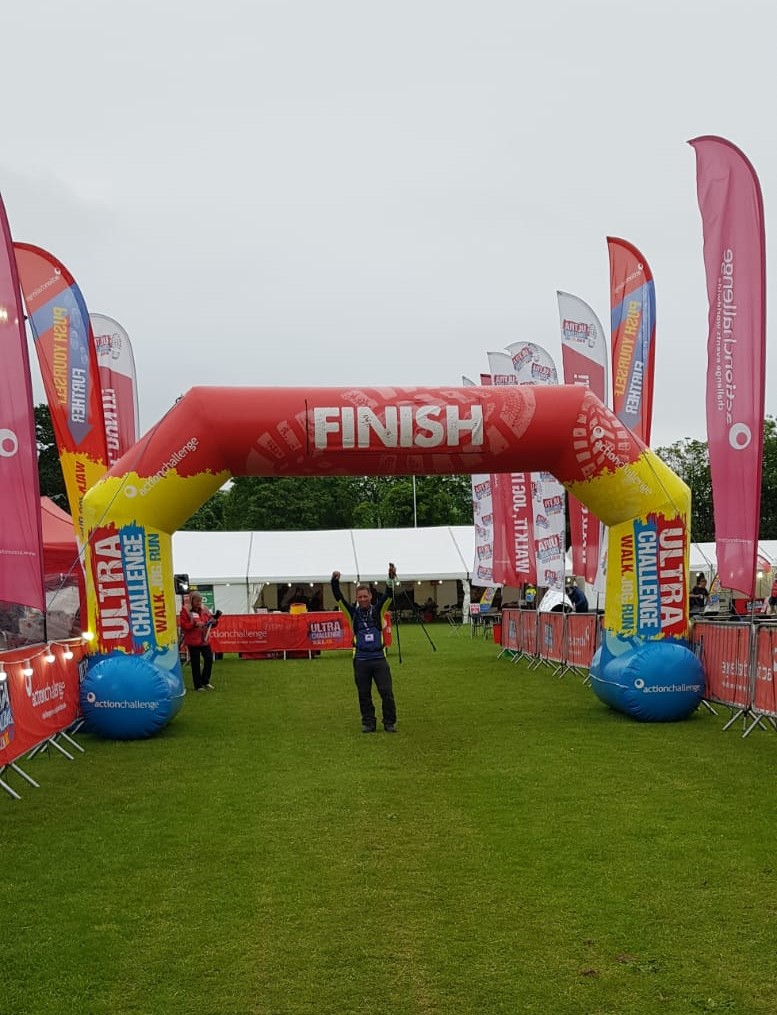 Ready to challenge yourself?

If you'd like to know more about the Ultra Challenge Series, or are ready to book one up now, look no further!

Thanks to the generosity of everyone who sponsored Nick's Ultra Challenge, he managed to raise a whopping £1,752 (exceeding his £1,200 target!), which will go towards Age UK Medway's 'Virtual Retirement Community' - a specialist TV-connected platform which provides older people with an easy-to-use way to remain connected with their family and friends, and to help them stay mentally and physically stimulated, at times when they're unable to leave their home.