Age UK Derby and Derbyshire uses cookies to ensure that we give you the best experience. By continuing to use this site, you are agreeing to our policy. Read more about how we use cookies and find out how you can change your browser’s cookie settings.
OK
Skip to content

All Age UK local organisations, like Age UK Derby and Derbyshire, started from the same roots.
The history of Age Concern is linked to the upheaval of the Second World War. The war made life more difficult for older people in many ways. Early in WWII communities in the UK were asked to form local committees to support older people. 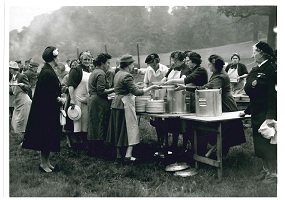 The dawning of the welfare state in the 1950’s meant money became available to fund OPWC’s work. The number of local OPWC’s grew and they became involved in ‘pioneer work’ such as day care. In 1955, the National OPWC (NOPWC) became a Council rather than a committee to emphasise and explain its co-ordinating role.

In 1971 the NOPWC became completely independent. The new name ‘Age Concern England’ was adopted explaining the NOPWC’s role coordinating activity across all of England’s OPWC’s.

Gradually most OPWC’s adopted the name ‘Age Concern’ followed by their geographical descriptor. At the same time many local committees joined together in county or city committees which eventually became countywide Age Concerns like Age Concern Derby and Derbyshire.

Although most OPWC adopted the name Age Concern some did not. If you look around in Derbyshire you will find evidence of OPWC in village halls and community centres. Some continue, largely un-changed, to coordinate activities for older people in their community 75 years after they were created!

Age Concern, the federation was created in June 2000. Every Age Concern from the smallest village Group to the largest countywide Organisation was an equal member of the Federation and an independent charity with its own Trustees, constitution and money.

held a special place in the Federation. It did not provide direct services to older people, and was not the ‘head office’ of the Federation. Age Concern England worked strategically to influence policy-makers in government and the voluntary and community sector. It also provided resources open to all Age Concerns.

The merger of Help the Aged and Age Concern England created a new charity in April 2009. The new charity was named ‘Age UK’. This new charity brought many opportunities for fundraising, a single and powerful voice for older people at government level and improved campaigns. But the change also brought challenges including our change of name and branding and a new relationship between the federation and the new charity.

Where we are now:

Obviously as many ‘organisations’ from the old federation structure chose to become local partners with Age UK the federation was no longer a group of charities which shared the name Age Concern.  The new, direct, relationship between us and Age UK also meant many of the federation structures were considered unnecessary. In April 2011 a new structure was created called ‘the Age England Association’ which brought together Age UK, local partners like us and our Friends (smaller Age Concerns, 50+ Forums and ex- HtA friendship centres). It is a new way of working and we are still working through it but it has the potential to forge strong and effective ways of working together at a local, sub-regional, regional and national level, and with Age UK’s links to Help Age International, even an international level.

More information about our work