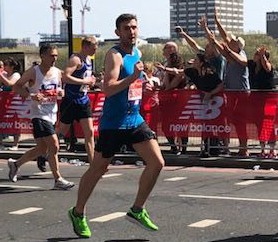 Temperatures in the mid-twenties and warnings about heatstroke weren't enough to put intrepid Harry Gregson off running the London Marathon in aid of Age UK B&NES.

"It was really hard," says Harry. "I spent months training in the snow only to be confronted by the hottest London marathon on record. My target time went out of the window and I just focused on completing it."

Harry's months of training in all weathers certainly paid off as he clocked an impressive finishing time of 3 hours, 45 minutes and 54 seconds on the day.

Having already raised £1,300 in aid of Age UK B&NES, Harry says he's hopeful some friends and colleagues will give more, given the extreme circumstances.

As the son of Nicola Gregson, chair of trustees at Age UK B&NES, running in aid of the charity was an easy decision to make. Harry says: "My mum spent most of her working life trying to improve the lives of older people. Because of this I've seen first hand what an essential role Age UK B&NES plays in the community.

"I'm very proud to play a little role in supporting their vital work."