Age UK gets Janet back on her feet 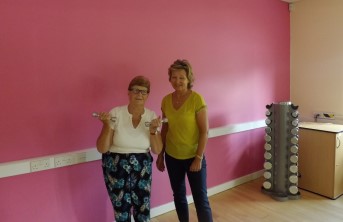 At the start of this year, Janet Gray from Wooler, could not walk without the aid of a stick and a great amount of pain but thanks to an Age UK Northumberland programme she now has a new lease of life.

She had originally attended one of Northumberland’s Ageing Well network ‘Winter Warmer’ events held in the Cheviot Centre in Wooler. Janet and her friend met with Anne Robinson, the deliverer of the Long term Conditions project and were motivated to sign up for the eight week Long Term Conditions programme.

The programme has been developed by Age UK Northumberland and is funded by the Dunhill Medical Trust and aims to help people with long term health conditions to get fitter, feel better and improve their quality of life.

Janet has several long term health conditions which affected not only her mobility and balance but her confidence too. She had given up work in a brewery after developing Rheumatoid Arthritis aged just 49, then Angina, Scoliosis of the spine and a stroke in August 2016 had left her with limited mobility and a severe lack of confidence to attempt small tasks around her home, or take trips out of the house. She depended on ‘her sticks’ to help her walking and balance and became totally reliant upon them to aid her mobility.

The first course was set up in the Evangelical Church Hall in Wooler and Janet went along. An assessment was undertaken at the start of the course to set an individual exercise programme to suit Janet’s needs. She commented: “Anne told me that some of the exercises would be chair based, which helped me decide to sign up. There were a lot of people in the class with a range of conditions and Anne tailored exercises to each person; she just didn’t deliver the same class to everyone. Everyone improved week by week; we even said what a lovely sleep we would have on the nights we had attended the classes!’ 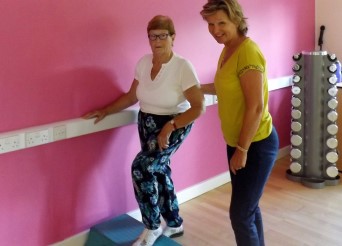 After each session, Janet could feel an improvement not only in her physical health, but her confidence improved and her mental well-being too. Janet stated “when I first started, I had to use one stick and hold onto the windowsill for support, which was probably more of a confidence issue than a physical one. By the end of the programme I was joining in with everyone else with no support. That felt great. My posture has improved a lot and I get a real sense of achievement when I do a little job around the house”. Janet also feels that the improvement in her health has an impact upon her husband, who is her main carer. They can now go out together and enjoy activities; which is also helping his mental and physical health.

As the end of the programme approached, the class realised that they wanted to set up something to keep them all together and active and a small grant was secured to hold an Exercise to Music class in St. Mary’s Parish Hall in Wooler. Janet attends the class weekly to maintain her progress. Janet added: “Anne gets rid of all your negative thoughts about your health conditions and keeps you moving. It’s a really worthwhile programme and anyone who feels they want to improve their outlook on life should sign up”.

To find out more details on the next set of classes, please contact Anne Robinson on 01670 784837or email anne.robinson@ageuk-northumberland.org.uk.