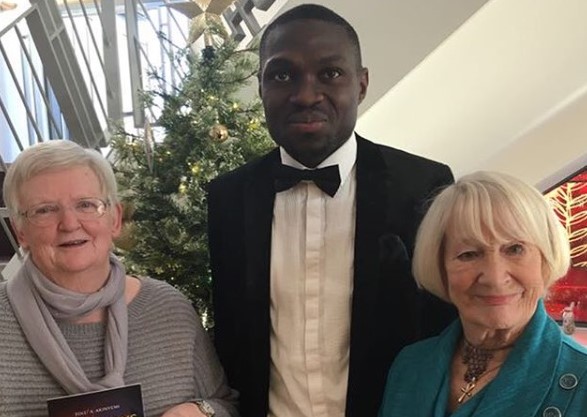 A kind-hearted author, Tolu A Akinyemi, has donated £1000 from the sales of his book to help fight loneliness in Northumberland.

Tolu, who has written and published Dead Lions Don’t Roar, visited some of the service users at the charity’s Social Friday group where he read some of his poems including Growing Old.

He also presented the money, which will go towards setting up a friendship line, reaching out to as many of the 5000 plus lonely elder people in the county as possible.

As part of his fundraising, Tolu has done a number of readings where he sells and signs his book. He has also sold books though his website www.tolutoludo.com and on a number of outlets including amazon where it is available in paperback and on kindle.

The collection of inspiring and motivating modern day verses addresses many issues close to home and also many taboo subjects, reflective of today’s struggles.

The uplifting book lights the way to a positive future and appeals to all age groups, anyone going through change, building or enjoying a career and facing day-to-day struggles. Many of the short verses will resonate with readers, leaving a sense of peace and wellbeing.

“I am a man that is passionate about life. As a Christian, my main aim with this book is to help people find the positive light and keep moving through life. Old age comes to us all, which is why I chose to support Age UK Northumberland. There is nothing I can imagine worse than being lonely in my elder years so I hope that my contribution helps the campaign and brings lights into someone’s life!”

The charity aims to raise £30,000 over the next 12 months for the Friendship Line. Helen Mills, CEO of Age UK Northumberland, said:

“We launched our campaign to fight loneliness in the county at the Chairmans Ball in November and thanks to the generosity of people like Tolu we are now over half way there already! I’d like to extend personal thanks to him, and also recommend that everyone reads Dead Lions Don’t Roar. The messages are pertinent to us all!”

The next stage of fundraising is ‘There’s Only Time For Tea’. The new campaign created by Age UK Northumberland is encouraging residents and businesses to make time for older people in the county between January and March by inviting them to coffee mornings and tea parties.