Success at the Big Knitathon 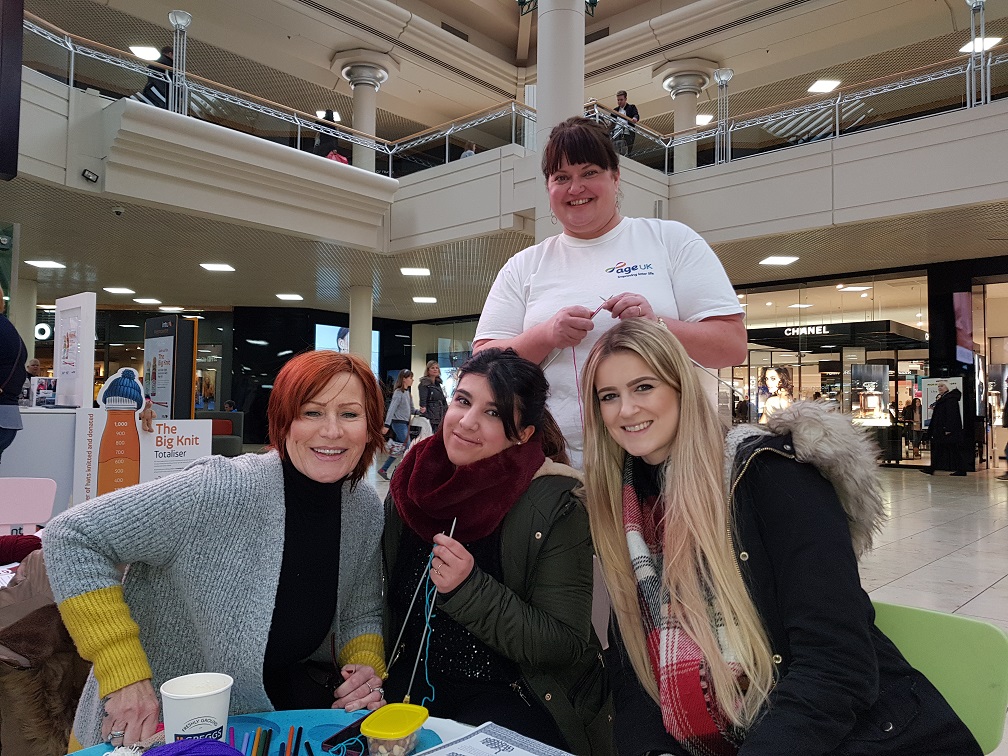 On 3 March 2018, over 130 little hats were knitted and they're going to make a big difference!

On 3 March intu Metrocentre is hosted The Big Knitathon in Town Square, near House of Fraser, to launch the Big Knit for Age UK Gateshead and Age UK Northumberland. Staff and volunteers from both branches of the charity along with Pauline from Ready, Steady, Knit in Prudhoe, taught wannabe-knitters the basics, highlighting the importance of The Big Knit campaigna.

The Big Knit is a national campaign that started in 2003 when Innocent Drinks asked people to knit little woolly hats to go on the top of their smoothie bottles - for each drink sold Innocent makes a donation of 25p to Age UK.

So far the people of the UK have knitted an astonishing 6 million hats, raising over £2 million for Age UK which has helped to fund activities at local Age UK centres including lunches and dance classes where people can socialise and make new friends.

As well as The Big Knitathon intu Metrocentre will be hosting knit and natter hours over the next few months to encourage shoppers and retailers to get involved in the campaign.

Shoppers will be able to drop their knitted hats at any customer service desk in centre from the launch of The Big Knit until October. Handing them in to intu Metrocentre, ensures that funds raised will support local people who need it most.

Staff from the shopping centre will be using some of their volunteering days to spread the joy of knitting, from encouraging young people to develop a new skill to helping people at intu Metrocentre’s charity of the year, Dementia Care, to rediscover the joy of a hobby from years gone by.

“We’re delighted to support The Big Knit – it’s a fantastic campaign which works to combat loneliness on multiple levels. Not only does it bring people together through knit and natter groups and events like The Big Knitathon but it raises funds which go back into the region to further strengthen the bonds of the local community with lunch clubs, befriending services and exercise classes.

“With our shoppers’ help we’re hoping to hit a target of 1000 hats to add to the regional total – so we’re encouraging everyone to dig out their knitting needles and get knitting!”