Find out here about activities and events taking place at Age UK Westminster.

If you need help with your digital device (mobile, laptop, iPad, Tablet) join us for one to one assistance by a committed volunteer from 'Fidelity'.

This session will be available through the ZOOM Video link.

Instructions on the ZOOM video installation are attached: How to use Zoom

Friday 12th June from 2.00pm-4.00pm Vegetarian Cookery session. 'Ollie the Roving Chef' and Vegetarian for Life will be hosting a cookery session via ZOOM and will be making bread, a soup and a dessert. 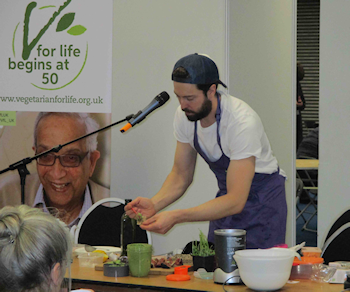 We hold ZOOM Chat Afternoons every week for social chat and conversation to break the monotony of 'Lockdown'.

This requires you to install ZOOM and once you have installed you will receive an email giving instructions on how to join the Chat Afternoon.

If you need any help, please contact the enquiry line.

Our first session went extremely well and was a big hit! We will be holding another 'Song Request' session on ZOOM from the 1950's to the present day hosted by DJ 'Silver Fox'. Let the memories flow and the nostalgia of the times be revisited once more.

Send your request for the playlist by Monday 8th June and listen to your favourite track on the day. Headphones attached to your mobile/laptop may give the best sound.

Charlotte, our Chair Yoga Exercise teacher is creating a series of videos to help us all stay fit and active while at home.

1) Strengthening the Core - exercise routine with stretching and breathing exercise to relax the body.

2) Lower Back & Self Care - work into stretches to ease lower back pain and a visualisation at the end to relax the body and release tension.

3) Deep Breathing - practicing deep breathing is important to oxygenate the blood and nourish the body. It also works to calm the mind and alleviate anxiety:

Hymns of the Day

For those of you who are missing Church Services there are Hymns on-line whereby you can sing along to the music provided by the Royal School of Church Music. Please follow the link:
https://www.rscm.org.uk/hymn-of-the-day/

In times like these, we recognise the importance of bringing people together, and know lots of you won’t be able to meet up in the same way as before. Create to Connect is a response to the impact of Covid-19 – an invitation to get creative at home and with others in your community – and see what happens along the way.

Alongside the daily challenges, you can download a free tailored activity pack to help you engage your communities in the challenges – online and offline.

For those of you who love the theatre the National Theatre is providing free full length plays to watch every Thursday.

A timely, moving and funny insight into the workings of 1970s British politics by James Graham.

Enjoying two sold-out National Theatre runs, a live broadcast live in 2013, and a West End transfer, This House is a timely, moving and funny insight into the workings of British politics.It’s 1974, and Britain has a hung Parliament.

The corridors of Westminster ring with the sound of infighting and backstabbing as the political parties battle to change the future of the nation.

During this era of chaos, when a staggering number of politicians die and age-old traditions are thrown aside, MPs find they must roll up their sleeves, and bend the rules, to navigate a way through the Mother of all Parliaments.

When an old adversary threatens Rome, the city calls once more on her hero and defender: Coriolanus. But he has enemies at home too. As famine threatens the city, the citizens’ hunger swells to an appetite for change, and on returning from the field, Coriolanus must confront the march of realpolitik and the voice of an angry people.

View the amazing galleries of the National Gallery Virtual Tours:

Enjoy Art wherever you are and explore the Tate Gallery online:

It is important to keep fit and active at this time and the following link to the NHS Aerobics for beginners may be useful:

Telephone Befriending which is extremely popular is available and we are also launching one to one Befriending by ZOOM/Whatsapp/Facetime video linking. If you would like to see who you are talking to rather than chat over the telephone.