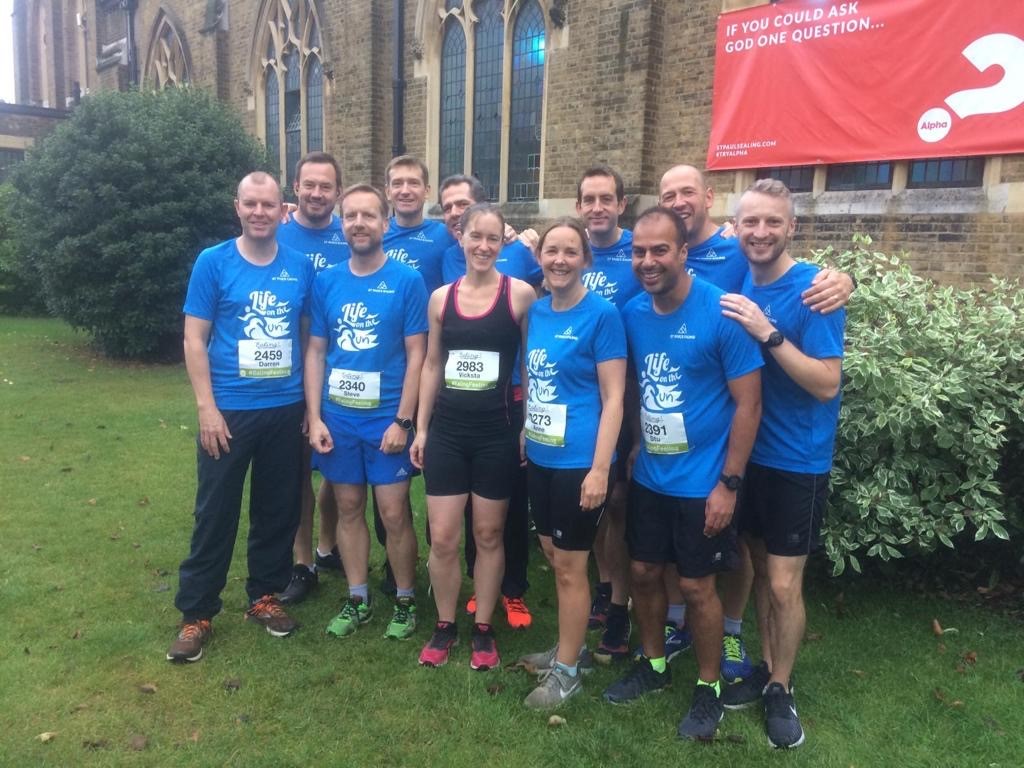 What happens when an Associate Vicar, a Police Officer and a Head of Finance can’t get out for their group run during lockdown? No, it’s not a joke, but the resulting story from St Paul’s Ealing shows a community creatively coming together to support their local charity through the coronavirus pandemic.

‘Life On The Run’ is a running group born out of the church community at St Paul’s in the leafy Northfields area of the borough of Ealing. It is a place where seasoned and new runners can come together for company and fitness. Ordinarily St Paul’s is a very active church with a diverse population and lots of going on from toddler groups to activities for older people and four services every Sunday. As ‘Life On The Run’ founder member Police Officer Darren puts it, “The community is at the heart of the church and the church is at the heart of the community”.

Now, in the wake of the coronavirus, St Paul’s stands quiet, and its community are finding other ways to come together, albeit at a distance. So, when the organisers of the London Marathon announced their plans to launch the 2.6 Challenge, to help charities facing huge losses in income, Darren couldn’t resist getting involved. On a Sunday morning run the idea popped into his head to organise a 26 hour non-stop relay trying to cover 260km and raising money for a local charity. By Sunday evening plans were underway and by Monday all of the running slots were full and the sponsorship money was rolling in.

Fellow runner Alan Phillips was responsible for finding the charity that felt like the right fit for their efforts. “We wanted to do it for a charity that was of the moment, but were aware that NHS charities were getting a lot of publicity and funding, so we wanted a charity that was a bit more under the radar and also local.” Alan noticed that Age UK Ealing seemed to have a lower profile than other charities but that it was doing important work for older people in the local community. St Paul’s itself also has a connection to the charity through the church’s own work with older people experiencing isolation. And when Alan got in touch with Age UK Ealing, we were delighted to be offered the much-needed support.

Originally setting themselves a sponsorship target of £2,600, ‘Life On The Run’ had already exceeded the total before their challenge even began and to date they have raised an astonishing £4,631. Reginald Parkinson, Chief Executive of Age UK Ealing was there in person at the end of the relay to offer a socially-distanced thanks to everyone involved:

“I’d like to say a big thank you to St Paul’s Ealing and ‘Life On The Run’. The board of Trustees, staff, volunteers and most particularly our service users, the older people of Ealing that this fund is designed to support, thank you so much for everything you have done for us. What you’ve done in the last few days is exceptional.” - Reginald Parkinson, Chief Executive

With income plummeting at just the time that older people in the community need more help than ever before, Age UK Ealing was certainly in glad of the help. We have had to quickly to redesign our services to help people to stay safe and well at home, and to ensure that they have someone to talk to and access to food, medication and other essential support. The income raised by the relay will make a big difference.

Age UK Ealing, St Paul’s and ‘Life On The Run’ look forward to continue collaborating and supporting one another and the wider Ealing Borough community, through the coronavirus crisis and beyond.