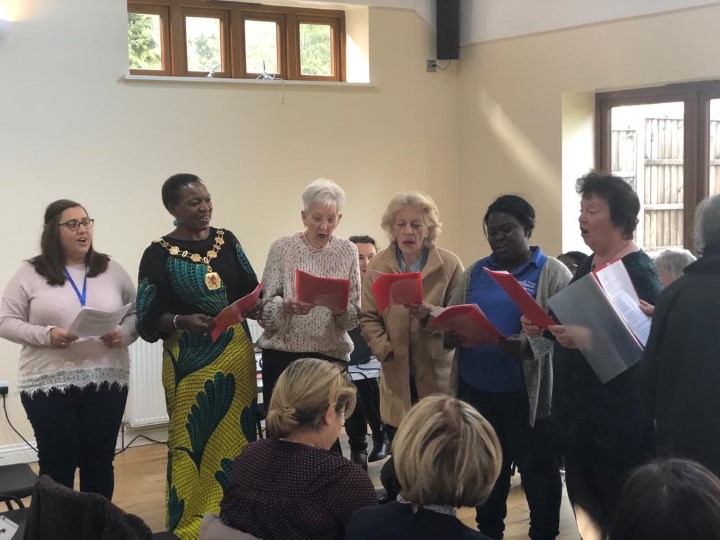 Age UK Enfield held a successful and lively AGM on 14th November, with over 70 people attending.

The event kicked off with the Charity’s Dementia Choir, who are older people with dementia, singing “When I Need You” and “Lean on Me”. The Mayor of Enfield, Cllr Kate Anolue, joined the singers before addressing the meeting.

The Leader of Enfield Council, Cllr Nesil Caliskan, spoke about how the Council was supporting its most vulnerable residents (both children and those needing Adult Social Care), working with other agencies on crime, and working to improve housing and town centres. She praised Age UK Enfield’s work including plans to develop its premises.

The Chair of Trustees, Andy Pallikarou, thanked the charity’s dedicated and skilled 94 volunteers, who contribute over 650 hours of their time every week. Gary Jones, the CEO, thanked funders and described the plans to expand home care support and re-vamp the Parker Day Centre. He praised Age UK Enfield’s advice service which raised over £1mil in disability benefits alone last year, but said the service needed more resources to meet needs.

At the end of the AGM, the Council Mayor and Leader joined in with older people and other guests in armchair keep fit, led by the Charity’s Fit for Life manager Mark Huggard. Fit for Life delivers 23 exercise and dance groups and walks each week.

Age UK Enfield is committed to delivering a range of local person-centred services, with an emphasis on health, wellbeing and choice.

Age UK Enfield works with about 6,000 older people in the borough every year, with a range of services including Information and Advice, Care Navigation, Fit for Life fitness classes, Memory Club, Falls stop service, and much more.

Summary of our achievements