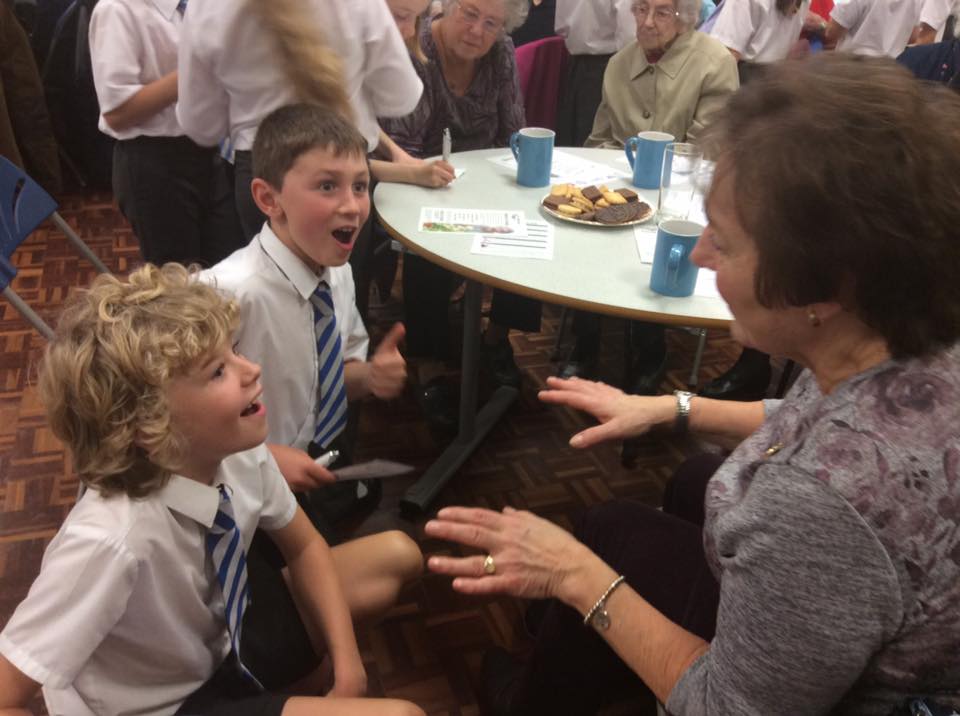 Over 30 local older people were entertained at a Generation Jukebox event held at Bexton Primary School in Knutsford on Friday.

To coincide with Age UK Cheshire East being chosen as one of the school’s Ethical Enterprise Charities for 2019/20, the school organised an event which saw children from Year 5 singing songs from the 60s and 70s to an audience of local older people. What made the event even more special, was that children from three other primary schools in Knutsford, namely Manor Park, St Vincents de Paul and Egerton also came along to join in the singing, making the afternoon a true community event.

Those attending were treated to cups of tea, coffee and biscuits, kindly donated by the local Waitrose store, whilst the children sang a selection of popular hits from the 60s and 70s, including ‘Waterloo’, ‘When I’m 64’ & ‘For once in my life’.

At the end of the singing, the children were invited to talk with the older people about a particularly happy memory they had from their childhood, which the pupils would then make into a picture to be submitted to Age UK Cheshire East as part of an art competition.  The shortlisted entries would then be displayed in the charity’s shop in King Street, Knutsford, and the winner selected by a group of the charity’s volunteers.

Reflecting on the afternoon of singing, Emily Armstrong, Headteacher at Bexton School commented “Our children have been learning this term about issues impacting on older people as part of our Ethical Enterprise Initiative.  This afternoon, it has been wonderful to see the animated conversations taking place between the young and older people. It is great to see our community coming together and sharing such a wonderful afternoon of entertainment!”

Damon Taylor, the Charity’s Chief Executive commented “We are really grateful to Bexton School, and indeed the other schools in Knutsford, for making the event such a special one for all the local older people attending. I know from chatting with some of those present, that they absolutely loved the event, with some getting quite emotional at young people singing. One of the key focuses of Age UK Cheshire East is to break down some of the barriers that can exist between younger and older people, and there is no doubt that the event today really helped do that.”

The charity and school will undertake further activities together during the Autumn term as part of its Ethical Enterprise Initiative.