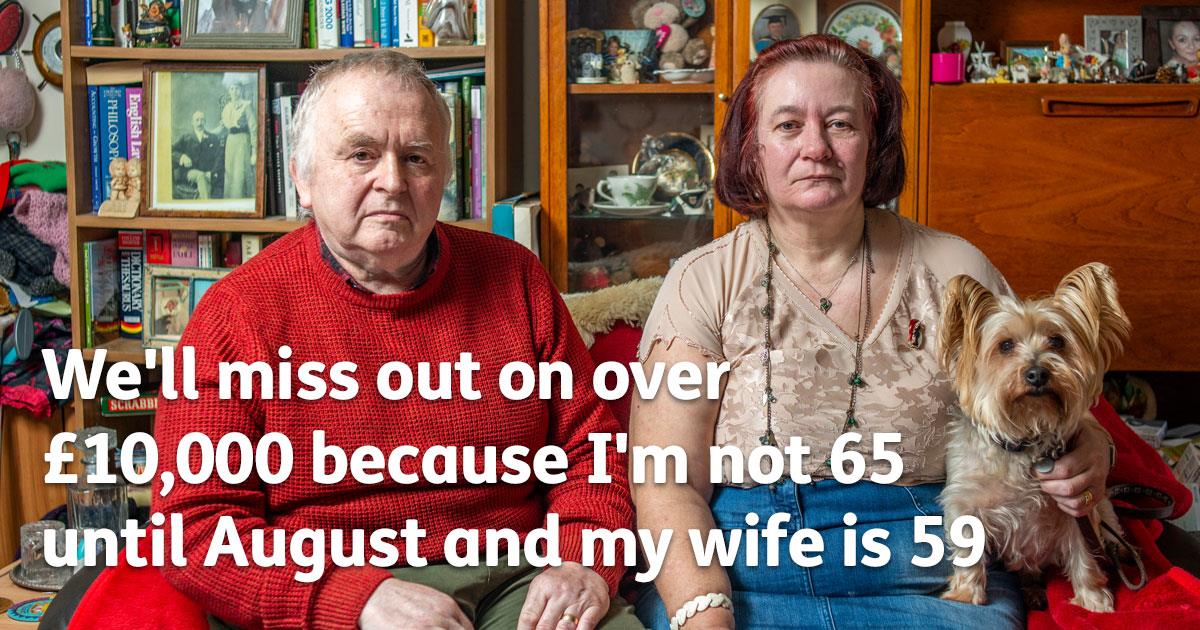 Charity calls on all pensioners with a low income and a non-pensioner partner to put in a claim or risk missing out on up to £7,000 a year

Age UK Cheshire East is calling on all pensioners living on a low income with a partner of working age to urgently check their eligibility for Pension Credit and Housing Benefit and put in a claim before the Government changes the rules on 15th May.

The change, sneaked out the evening before the ‘meaningful vote’ on Brexit, will see the right to claim Pension Credit and Housing Benefit – important tools in the fight against pensioner poverty – withdrawn from future claimants who happen to have a partner who hasn’t yet reached their own pensionable age, with potentially devastating consequences for all those affected. Age UK Cheshire East is warning that this could have a devastating impact on local residents.

Age UK Cheshire East is urging anyone who may be entitled to claim benefits to call 01625 612958 to find out more.

The Charity is warning that by slashing the benefits that couples needing to claim benefits in the future by as much as £7,000 a year,the new policy will place some pensioners in the absurd position of being financially better off if they split up and live apart from their younger partner. This is because once the change is implemented, the older partner could be eligible for significantly more money by claiming Pension Credit as a single person than if the pair of them claim Universal Credit as a couple.

Although in theory this change will not impact on existing claimants the Charity is warning that if a so-called ‘mixed-age couple’ temporarily loses their eligibility for these benefits because of a change in their personal or financial circumstances, from May they will be unable to regain it and will be thrown back onto the Universal Credit regime, the problems of which are well documented.

Over recent years the means-tested benefit systems for pensioners and people of working age have been growing further apart. Some of the main differences are:

· How any earnings are treated: For Pension Credit, usually just £5 a week (£10 for a couple) of earnings from work are ignored after which earnings reduce payments £1 for £1. Under Universal Credit, earnings reduce benefit by a 63% taper. So, for example, if earnings rise by £100 a month, benefit reduces by £63.

“It’s not at all unusual for one partner to be older than the other so many older couples on low incomes could be affected by this policy change, even though many of them may not know it yet.

“That’s why we’re urging any pensioner who thinks there is even the slightest chance that they could be entitled to Pension Credit and/or Housing Benefit to put in a claim now rather than wait until May – it could give them as much as £7,000 more to spend a every year until the younger partner becomes a pensioner.

“We are urging any older person who is worried about money or thinks they may be entitled to claim Pension Credit or other pensioner benefits to get in touch with us ASAP before 15th May so we can help them through the claiming process.”

1. Many older people are missing out on the benefits they are entitled to. Nationally it is estimated that 50% (360,000) couples entitled to Pension Credit are not receiving it. Among single pensioners, 37% (840,000) who should be receiving Pension Credit have not claimed. (Income-related benefits: estimates of take-up 2016/17), DWP published 2018).

Mixed-age couples – the impact of changes for a hypothetical couple

Peter, aged 70, draws a State Pension of £140 a week. His wife Jean, aged 62 gave up work five years ago to care for her father who has recently died. They own their home and have a few hundred pounds in savings. They receive Pension Credit to top up their joint income to £248.80 a week (the standard rate of Pension Credit for a couple rising to £255.25 from April 2019).

After the rules change….

Peter and Jean’s position will be protected if they are still receiving Pension Credit when any changes come in - as long as their circumstances stay the same.

However, a couple in this situation who need to claim benefits for the first time after 15 May 2019 would not be entitled to Pension Credit due to Jean’s age. Peter’s State Pension is too high for them to receive Universal Credit (currently £498.89 a month, around £115 a week, and not due to change in April 2019).

So, their total joint income will just be Peter’s State Pension (around £143.50 a week from April 2019). If Jean cannot find a job, which may be difficult given her age and time out of the labour market for caring, this will be their income for another 4 years until Jean reaches SPA at age 66. By this time Peter will be 74.

If Peter was single…..

However, if Peter was living on his own, because they separate, or Jean dies, he would be able to claim Pension Credit in which case his State Pension will be topped up to £163.00 a week (£167.25 from May 2019) – considerably more than the Universal Credit standard rate for a couple of about £115 a week.