The impact of befriending

Our Marketing and Comms Manager, Nikki, spoke to Elsie, 77-year-old resident and all-round superstar. Elsie has volunteered with us as a befriender and with other organisations since the early 2000s! 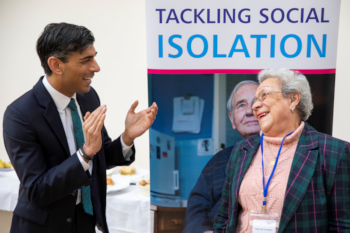 Elsie told me she loves being a busy, active person, and she sees herself as happy go lucky. Having retired from construction/engineering, she decided to find new things to do with herself. She plunged herself into volunteering.

Elsie has volunteered in hospitals, for charities, at Imperial (as a research ambassador) and has also become quite the celebrity lately after meeting the Chancellor, Rishi Sunak and confronting him on the energy crisis. She has recently appeared on ITV news and been involved with a peaceful protest, asking for more help for over 50s. Elsie said she enjoyed getting to meet someone in power and having the chance to ask him questions without him giving pre-prepared answers! 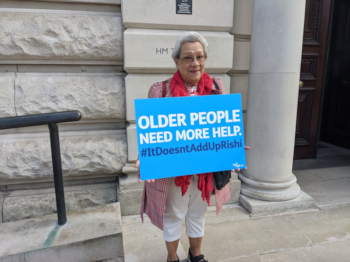 When asked why she volunteers so much, Elsie explained, “It’s time to give back. The only way you can keep sane is to keep active.” Though the pandemic has obviously had an impact, Elsie added, “I didn’t stop volunteering. The only difference was I wasn’t going out. Fortunately, I’ve always loved technology. I use my phone for everything - shopping, social media, Twitter, Facebook, Instagram, emails, paying for things, crosswords puzzles, drawing apps, and all the NHS apps.”

Elsie also told me about why her befriending work was especially important to her: “I have befriended lots of people over the years. I have great satisfaction being there for others. I would like to think there are people out there to befriend me when I become housebound, that somebody can actually come in and sit with me.”

Elsie also reinforces why we know befriending is vital for many, how even just one bit of human interaction per week can make a real different to someone. Elsie said, “They liked going for a walk or go to a shop so they could pick food. Little things like that brought them joy. They wanted people to hold their hand and support them at appointments. I tried to teach them to use Skype or Facetime to talk to people in their lives who didn’t live close by.”

Elsie keeps in touch with her family, who are spread all around the world, via technology. It was an absolute pleasure to meet Elsie, who is a positive, generous and fun person.

If you’d like to make a difference in an older person’s life, we’re always looking for befriending volunteers.