Our volunteers continue to provide long term support to the older people of York, and many are taking on new additional roles to help with additional demand during the Coronavirus crisis. Here are some of their wonderful stories.” 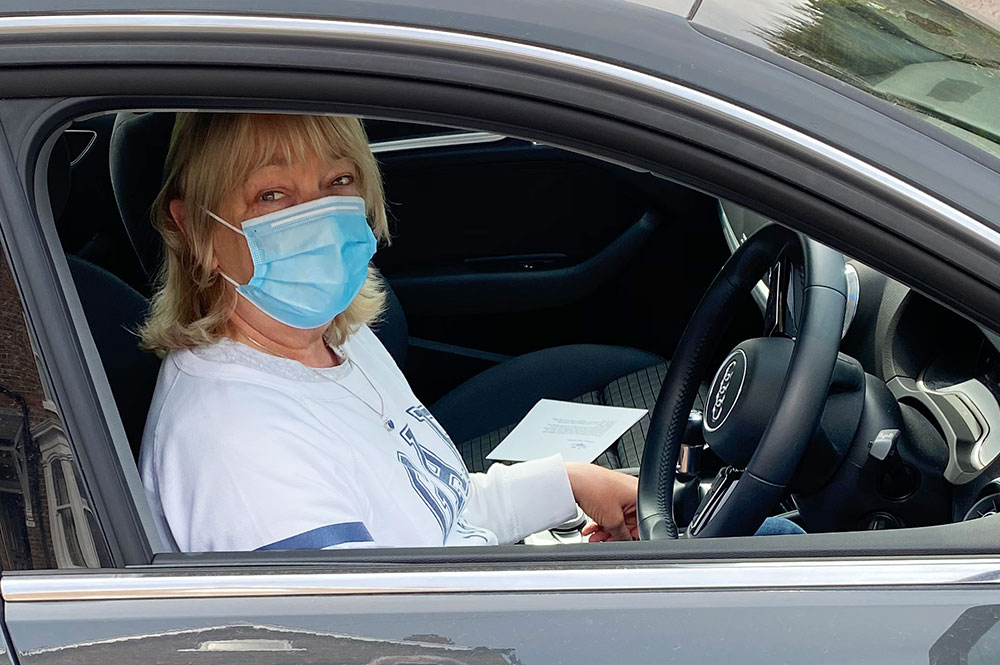 “I’m a recently retired nurse - although I still work some ad hoc shifts on the nurses bank at York hospital. Over my 40 + year nursing career I have been involved with elderly people in many ways both in the community and in hospitals. I live with my retired husband; we are lucky our 3 grown children all live fairly close-by and we see lots of them. I have 3 young grandchildren- and would normally look after them regularly (something I’m really missing at the moment). I was the main carer for my father in the last few years of his life and spent a lot of time with him.

Since he died a year ago I have missed the time we spent together and felt that I had something to offer as a Befriender and that I would enjoy getting to know an older person. I know many older people suffer from loneliness, which must be terrible, so being able to set aside some regular time each week to listen and chat with someone has mutual benefits- it’s something that we can hopefully both look forward to. Because of the current social distancing and shielding guidelines I was unable to meet the lady I had been matched with as a befriender but have instead been able to have regular telephone chats with one lady over the last few weeks. She is finding the isolation caused by the pandemic difficult and I think knowing that she will have regular contact with someone is helping to relieve some of her anxiety. She makes it very easy - she’s such a chatterbox- and much of what I do is just listen!

I have just started telephone befriending a second lady this week and although we have only had one chat so far I’m looking forward to getting to know her as the weeks go by. During the pandemic I’ve have also been able to offer my spare time to Age UK York, through the City of York Council volunteering scheme by helping out with the Home from Hospital service. I have needed to use this valuable service whilst at work to help vulnerable patients get home after discharge so I’m happy to be able to help the regular volunteers during this busy time. I am very lucky in my life and volunteering is a rewarding way to spend my spare time.”

Howard Widdall, Trustee with Age UK York on why he is volunteering

“Reading about the NHS campaign to recruit 250,000 volunteers in the newspaper on the morning of 25th March, I was thinking about signing up, when I read that one area they wanted people to volunteer for was driving patients home from hospital. I had read in a Covid-19 response update from Jennifer Allot (CEO, Age UK York) to Trustees on Monday 23rd March that it could be that Age UK York would need more drivers for the Home from Hospital service, as several regular drivers were in vulnerable groups and unable to continue working. It occurred to me that instead of signing up with the NHS, I would like to offer my services, in this capacity, directly to Age UK York.

I’m very pleased that my offer of help was accepted and I did my first drive on Monday 30th March, taking a lady home from York Hospital A&E to Malton. Since then I have done a further 13 drives, taking patients home from A&E, from the Urgent Care Centre and the discharge lounge at York Hospital, picking people up from their homes, taking them to their Doctor’s appointments, then bringing them home again, and collecting medicines from the Pharmacy and delivering to people in their homes. Quite often, I’m the only person outside of their homes, other than doctors and nurses, that they have seen since well before lockdown began, so they are keen to just have a chat, which, of course, is all part of the service. I’m really enjoying being able to help out in this way.

David, a befriender and a driver

I have been volunteering with Age UK York since 2015. Before that I'd been caring for my Mother who died in 2012. I started befriending in 2015. I have regularly visited my friend every week; even when she spent a period in hospital in 2016, and a short time in a care home. I have regularly kept in touch with her by 'phone, ringing her three times a week and speaking to her for up to thirty-five minutes. Sometimes I read to her down the phone. Recently for her birthday, I rang my friend and sang "Happy birthday" to her down the phone. .

Since 2017, I have also been a driver for Age UK, taking people shopping and to hospital and doctors' appointments. Though the clients have varied, I have a group of people that I see on a regular basis: two women I took shopping or alternate weeks until the lockdown, and two couples who I've had regular contact with through shopping and hospital appointments. Both couples have asked for me when they've put in driving requests and its nice to feel that they are happy with the service I've provided. .

During the lockdown I have also been an emergency volunteer for Age UK while their normal services have been suspended. To date I've done one emergency shopping trip and three prescription collections. I've found the work I've done for Age UK more enjoyable and profitable than "normal" work; mainly due to the feedback I've got from the people I've helped and also from my friend. It has helped ease the grief and feelings of loss I felt after my Mother's death, and that I'm making a more lasting contribution to society. .

I feel congratulations aren't enough though. Organisations like Age UK need resources, personnel and above all finance to keep going and provide the services that will be needed long after the COVID-19 pandemic is over.

My name is Carol and I have done a lot of things in my life but my most rewarding time was the 24 years I spent working for Age UK York.

I answered an advert in the Evening Press for a Day Club organiser and my interview was dominated by Bingo number rhymes and music trivia. But I got the job and it grew and grew, like Topsy!

We started with one club and soon had three, then four. Working with a superb group of staff and volunteers, some who came for days and some who dropped in for an hour or two, some who wished to remain anonymous in the kitchen and some who led singing sessions, some who gave talks, some ran handicrafts groups, some who lead exercise groups and some who just came and chatted. Whatever their chosen role the work of the volunteers was invaluable and the Day clubs would have been poorer places without them.

At one point we had 12 clubs two of which were special Dementia Groups. Working with these clients gave me the inspiration to return to serious education, having left school after ‘ O’ levels (remember them?) I never imagined that I would gain a degree, but with the support of the CO and all my staff I went to Bradford University and studied for a BSc in Dementia Studies.

The knowledge I gained helped me to support the clients and their families and my colleagues through many and varied Dementia journeys.

After retiring I was lucky enough to accompany my husband on trips to Perth in Australia and while he was busy working I took up a volunteer post in a Day Club for seniors and another for young people with disabilities, I was able to used my experience to run sessions and activities on the other side of the world!

Unfortunately, as in the UK, the club struggled for finances and eventually closed with the clients being bussed out to different areas, so I went to a city centre drop in lunch club and did a front of house service, it was hard but everyone who came was so pleased to be able to get a reasonable priced, home cooked, nutritious meal that the place resonated with happiness, goodwill and music. Always the radio, or a pianist and sometimes a singer.

Yes I learned a lot working for Age UK York and when I fully retired I wanted to experience the other side of the coin so I became a volunteer at my local school. It is really fulfilling, I listen to readers and I read to them, I mix paints, I make cardboard models and glue scrapbooks, I draw silly pictures and I sharpen pencils! I feel like I’m there on a jolly but the staff are really encouraging and they say I am really helpful, I do the things they don’t have time to do so the kids benefit from having more teacher time.

With the arrival of the Covid 19, I thought it wise to retreat from school so applied back to my old colleagues to take up a volunteer role with Age UK York. I have been slotted into the telephone befriending team and have a lovely lady whom I call once a week for a chat, we compare notes on wildlife, birds, pets, shopping and life in general. I hope to be able to do more, perhaps as restrictions are lifted I can get more involved, and I am looking forward to September when hopefully I can return to my role as surrogate Grandma in school.