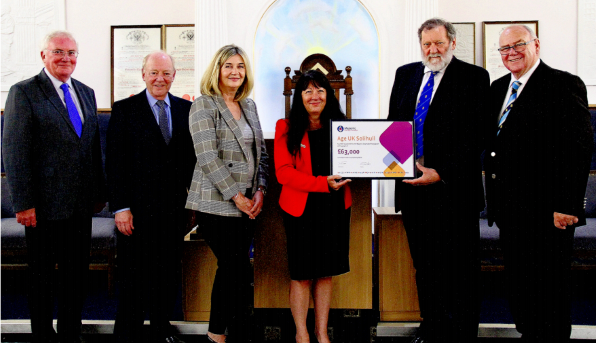 There are 3.6 million older people in the UK, of whom over 2 million are over 75 years of age and live alone. Research over loneliness shows that it is associated with a 50 per cent increase in mortality from any cause.

To tackle daily problems caused by loneliness and isolation, such as financial hardship, decline in physical or mental well-being or life transitions including retirement and bereavement, Masonic Charitable Foundation (MCF) launched a £1 million-worth three-year partnership with Age UK in 2018 to fund a new project called Later Life Goals.

Thanks to this project, Age UK advisers have been helping older people identify their goals for later life.

So far, the project has supported over 2,370 older people.

Age UK Solihull, one of thirteen local Age UKs involved in this project, has been working closely with Knowle Masonic Centre (KMC).

During the summer, Keith Reynolds, Deputy Chairman of KMC, presented Anne Hastings, CEO of Age UK Solihull, the certificate sent by MCF granting £63,000.00 as part of the 3-year partnership.

The level of cooperation between KMC and Age UK Solihull goes even beyond funding projects. KMC had gladly welcomed Age UK Solihull to have their regular meetings and social gatherings at KMC’s premises.

Age UK Solihull and KMC is delighted with this partnership, and to contribute the project, members of the KMC are encouraged to participate with their families.