a choral work by Bob Chilcott

The Voyage (published in 2016), a collaboration between Bob Chilcott and author Charles Bennett, was commissioned by Age UK Oxfordshire as part of a project to highlight and combat loneliness (Campaign to End Loneliness).The work was conceived as a project that aimed to bring young and old together and to highlight some of the challenges we all ultimately face in the voyage through life.

Refreshments will be available during the interval

Concert tickets can be purchased from Age UK Dacorum, Half Moon Yard, High Street, HP1 3AE  or call  01442 259049.  Please click here to send us an online message.
Ample parking facilities are being provided on the moorland adjacent to St John's Church by kind permission of Box Moor Trust.

Throughout the piece, singers assume the role of narrator, guiding the listener on a voyage using nautical imagery. The outer movements provide a watery framework to the piece with rippling figurations, gentle waves and echoes in the choral parts.

There will be a full supporting programme in the second half of the concert in which each of the groups will perform their own selection.

More about 'The Voyage'

The Voyage was, in 2017, shortlisted in the Learning and Participation Category of the Royal Philharmonic Society (RPS) Music Awards. The RPS Music Awards - presented in association with BBC Radio 3, are the highest recognition for live classical music in the UK.
The Voyage was also performed by VocalEssence in Minneapolis.

The concert is funded by Dacorum Borough Council, Boxmoor Trust, the John Laing Charitable Trust and others. Proceeds from this concert will go to the newly-launched Boxmoor Good Neighbours service which provides help and support to older people living in Boxmoor, Hemel Hempstead. 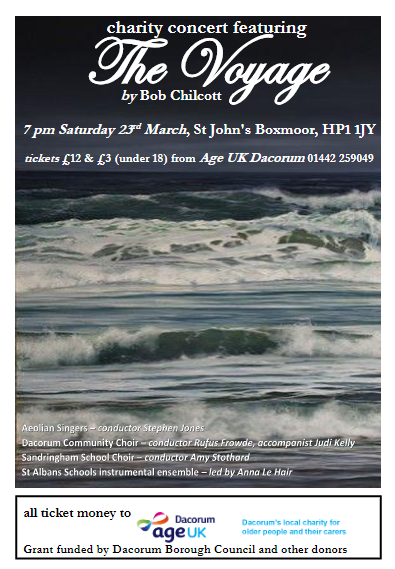