"I was hanging around with the wrong crowd, taking drugs and drinking up to 15 liters of cider a day."

Andy previously lived in Hemel Hempstead, where his living environment was not conductive for him, as the people he was friends with only heightened his alcohol and drug additions. He knew he had to change his lifestyle before he went down a deeper hole. 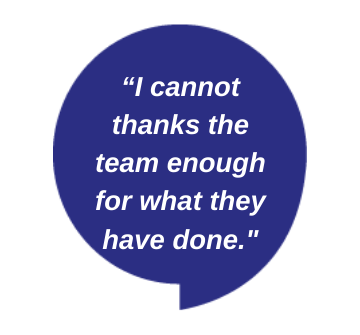 After taking a leap and moving away on his own, he sought help from the Hospital & Community Navigation Service (HCNS) who helped to turn his life around.

The team helped Andy to contact his new local GP for hospital support, and also helped him with his written applications for a new washing machine.
These tasks may seem small for some, but for Andy, having the chance to have fresh clothes (unlike before) was 'amazing’.

"I cannot thank them enough. Being able to have clean clothes is amazing. I have saved so much money being able to wash them, rather than throwing them away and buying new ones."