'I was sleeping in my van in a supermarket carpark, but with help from HCNS Team I was able to get my life back.'

Mr Lewsza, 61 years old, was living in temporary accommodation at YMCA whilst being supported by the mental health team, Turning Point, and Hertfordshire Mind Network. Towards the end of 2019, Mr Lewsza was in hospital having an operation on his leg. Whilst there he lost his place at YMCA temporary accommodation, leaving him homeless. 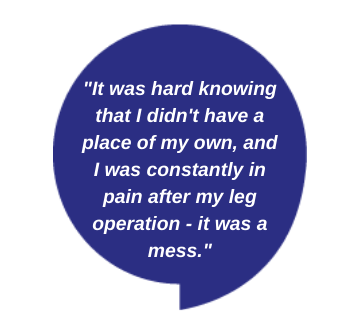 He subsequently ended up sleeping in his van at Morrison’s car park. This became untenable as time went on as security was installed at Morrison’s and he was often asked to move on. With help from his friends, he was able to get in contact with the Hospital & Community Navigation Service (HCNS).

The HCNS Team met with Mr Lewsza on numerous occasions to help him secure accommodation. As he needed to continue visiting the hospital for checkups, the team also organised transport for him which took a huge weight off his mind.

"I can't thank the team enough for the support they have given me. It was all so confusing, so they were a great help."