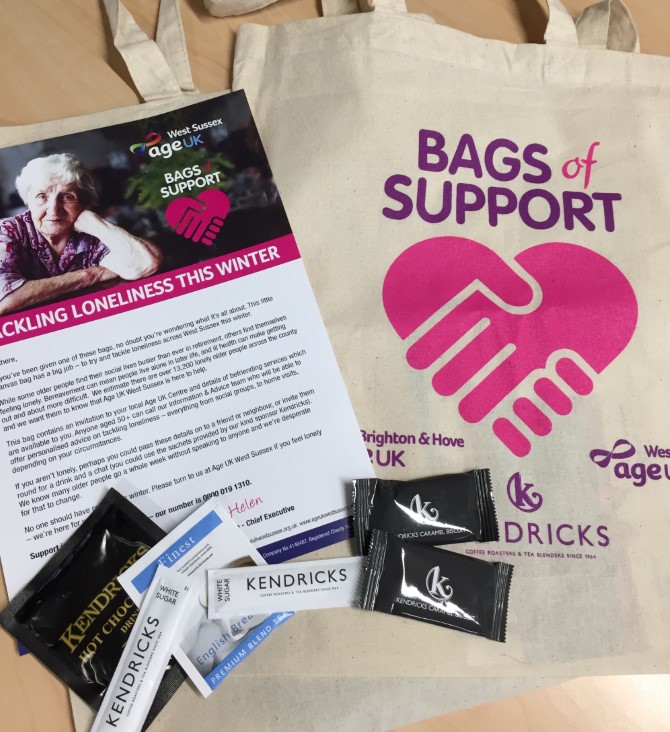 Age UK West Sussex, Brighton and Hove is giving out 500 bags of support, cotton tote bags filled with information and goodies – to local older people this December. The aim of the bags is to try and tackle loneliness this winter, by inviting people to attend their local Age UK centre, sharing information on befriending services and promoting social groups. The charity is also offering a listening ear and personalised advice on loneliness to those who call its information and advice line.

Age UK estimates there are over 3,500 lonely older people in Brighton & Hove alone[i]. The bags were prompted by research on loneliness conducted by the local Age UK[ii], which interviewed older people in the city. 40 % of participants were unaware of the help and support available to those feeling isolated. One said “I’m not aware of any support. I attend a tea club once a month with my one friend. This is my only outing, apart from a fortnightly trip to the supermarket”. Another said “I used to do more…but now I have lost touch with it all”.

Age UK Brighton & Hove hopes that taking a proactive approach and distributing bags among older people in the community will help them reach out and access the help available. Bags will be given out to people via home from hospital and nail cutting services as well as from the Age UK centre in Prestonville Road. Kendricks Tea & Coffee have kindly sponsored the bags, covering costs and allowing Age UK to reach more people in need. As well as information the bags contain Kendricks tea, hot chocolate and sugar sachets, along with some biscuits.

Helen Rice, Chief Executive of Age UK Brighton & Hove said “We know that many older people often go a week without speaking to anyone and that’s just  heart-breaking. No one should have no one this winter. We’re here to offer advice and support, so more people can chat, connect and make the most of later life. Please turn to us if you feel lonely, we’re here for you.”

In October, the Government launched a £2 million fund to tackle loneliness, acknowledging that it is one of the biggest public health challenges facing the country. It also recently launched the ‘Let’s Talk Loneliness’ campaign, which aims to raise awareness of loneliness, recognise the signs and tackle the stigma surrounding it.

Age UK West Sussex and Age UK Brighton & Hove merged in July 2019. Last year the charities helped over 15,000 older people, tackling a range of issues like poverty, social care and loneliness as well as helping people make the most of later life.

[i] Estimated number of older people aged 64+ who are lonely, LGA Research, 2011