Past and present corporate support

We are lucky to have had some fantastic support from local organisations. Read about the various ways we have partnered with businesses of all shapes and sizes.

Charity of the Year

We are currently the Charity of the Year for multiple local businesses. 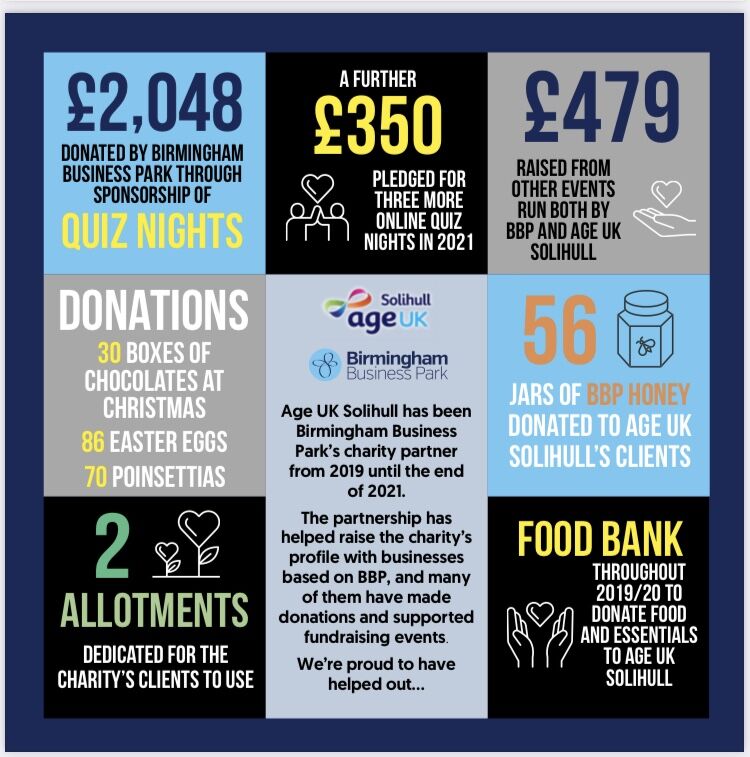 We were chosen as Birmingham Business Park's Charity Partner for 2019/20, and due to limitations brought about by the coronavirus outbreak, our partnership was extended until the end of 2021.

The infographic to the right shows just some of the support we received from the business park from the beginning of the partnership until April 2021.

Since then, the business park has also sponsored some t-shirts for us, hosted a Comedy Fundraiser and they are now planning some Christmas activity which will include our clients and hopefully raise some funds for us as well.

We have also been Sydney Mitchell’s Charity of the Year since 2018.

The local solicitors have hosted a Golf Day and two Smartphone Quizzes, sponsored our tshirts, and four colleagues who called themselves the ‘Peaky Climbers’ (pictured), completed the Yorkshire Three Peaks Challenge, raising over £1500, which was split between us and their other chosen charity, The Buddy Bag Foundation.

Sydney Mitchell have also supported our Smartphone Quiz Nights, taken part in Slip Into Slippers and in 2019 they hosted a Charity Ball which raised an incredible £10,000, also split between the two charities.

Another Golf Day is planned for 7 October 2021.

Find out more about the Golf Day 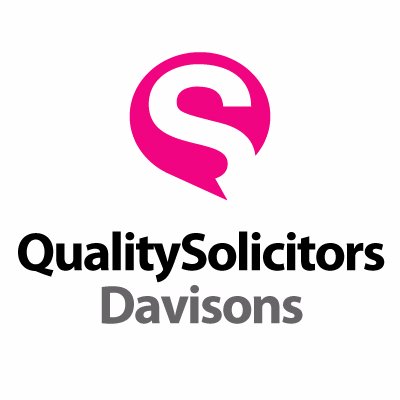 We have also been chosen as the Charity of the Year 2020/21 for QS Davisons. The Solicitors' firm has supported our Christmas raffle and chocolate bouquets, as well as raising over £7,000 for us with their own fundraising activities.

Past Charity of the Year partnerships

We were chosen by Knowle & Dorridge Ladies Circle Chair 2020/21, Jos Wolf, as her charity to support during her year as Chair. Our partnership commenced just as the coronavirus pandemic began, so fundraising opportunities were limited, but the group still managed to raise an incredible £3,940. We are so grateful for their support during such a challenging year, and we hope to be able to get together for a photo soon!

In 2018, we were chosen by Olton Golf Club’s Captain, Moray Hulme, as his charity to support during his time in position. Thanks to the generosity of its members, the club raised an impressive £8,050 over the year. Our CEO, Anne Hastings, and Fundraising Manager, Lorraine Hart, went along to the club to be presented with the cheque (right). Moray said, “The members were delighted with my chosen charity and consistently supported events throughout the year. We know that the funds raised will benefit local people, and it was a pleasure to support such a great charity.”

Data Service Provider for Britain’s gas market, Xoserve, raised a fantastic £2,341 during our Charity of the Year partnership. The money has been spent on two new self-help PCs for our South Solihull Community Advice Hub. Rather than relying on an advisor to complete online forms on their behalf, people who access the Hub for information and advice are empowered to help themselves using the touchscreen PCs, with the help of a trained Age UK Solihull volunteer.

The team at Xoserve continued fundraising for us even after our year as their official Charity of the Year was over. In In October - December 2019 they raised £225 from a Halloween Bake Off, a further £54 from their chocolate bouquet, and an astonishing £1,008 from their Christmas Raffle. We are extremely grateful for their continued support.

We’d also like to thank Coventry Building Society, Solihull branch, for having us as their Charity of the Year from 2015-2018. Throughout our partnership a total of £3,823.75 was raised, and we are very grateful for their support over the three years.

If you are considering choosing us as your Charity of the Year and would like any further information, please call us on 0121 704 7842 for a chat, or email events@ageuksolihull.org.uk.

We have two mutually-beneficial partnerships with local businesses where they will donate to Age UK Solihull if customers mention us when purchasing from them.

Morgan Parkes, a Solihull based recruitment consultancy, approached us after seeing the John Lewis Christmas advertisement in 2015 and wanted to support us:

Thank you to Morgan Parkes for their support!

In July 2017 a team from Legal and General Solihull took to the skies to take on a tandem skydive. They helped to raise £6,154.68!

St Johns have sponsored all five of our Charity Balls and each time, we have worked in conjunction with Solihull Sustain, raising a huge total of £90,000 over six years.

This taxi firm sponsored our ticket printing for our 'Rio Carnival' Charity Ball 2016.

We have had lots of support from John Lewis over the years.

We partnered with John Lewis Solihull for our Christmas campaign 2015. Their seasonal advert inspired Solihull residents to volunteer with us to become involved .

They made a generous donation to us so that we could hold a Christmas party for our clients and have helped us raise our profile through a presence in the store.

They have also previously been inolved in our Winter Warmth campaigns, completed a virtual bike ride, provided raffle prizes and donated wool for our Big Knit campaign in helping alleviate loneliness in older people.

Solihull Moors have been very supportive over the years. We've held two client Christmas lunches with over 90 clients/volunteers attending in 2015 and 2016, as well as in 2018.

We've also held three interactive quiz nights here between 2016 to 2018, and they've organised for some delicious food at each of our events.

We would like to thank all our partners, past and present, for supporting us.

If you are interested in partnering with us, give us a call on 0121 704 7842 or email events@ageuksolihull.org.uk.