We have been lucky enough to receive support from a number of local groups and associations in Solihull. They are a vital part of our community fundraising programme and help us to reach out to more people in our local area.

Age UK Solihull would be delighted if your local group would like to fundraise for us, or choose us as your charity of the year. 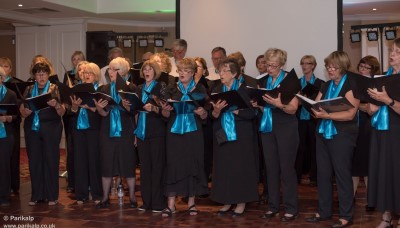 'Sing Bentley Heath!' choir are supporting Age UK Solihull in 2016. They came along to our Interactive Quiz Night in June 2016 and won!

On 7 July 2017 they sang at our showcase event of the year, our 'Hooray for Hollywood!' Charity Ball at St Johns Hotel.

The Lodge members ran a raffle and the proceeds were donated to Age UK Solihull. During 2015 and 2017, they have managed to raise a over £200.

We were chosen as the charity to support for Knowle & Dorridge Lion's Easter Egg Raffle 2019. Volunteers from the Lions and from Age UK Solihull sold raffle tickets at The Black Boy pub in Knowle over two weeks, raising a total of £1.399.02, half of which came to Age UK Solihull.

One member of the Lions, Nick Salter, is a Winter Warmth Advice Volunteer, and he is also taking part in the Great Birmingham Run for us this year (2019).

We were also one of three nominated charities for the Knowle Fun Run on 12 May 2013. It was the Knowle & Dorridge Lions' 30th Anniversary as well as ours so this was an extra special year for both associations. The Fun Run was a huge success and altogether £40,000 was raised with £10,000 going to Age UK Solihull. This money has gone directly back into our services to help the older people of Solihull.