Why free TV licences for the over 75s matter

It's not just 'the box in the corner.'

For over a million of the oldest people in our society, TV is their main form of company. That's why we're fighting to save the right to a free TV licence for the over 75s.

TV can be a lifeline for older people.

When mobility issues mean you struggle to get out and about, TV helps you stay connected. When money is a constant worry, it's your way to escape. And when you spend your days alone, it gives you something to rely on, something to look forward to.

Right now, all that's under threat.

In 2015, the Government quietly pushed the job of providing free TV licences to the BBC, with only limited public consultation and without the funding required to properly sustain the programme. Now, the BBC is planning to remove the right to free TV licences for the over 75s.

Who loses out if free TV licences are scrapped?

"It's the most vulnerable people in our society who'll suffer," said Caroline Abrahams, Charity Director at Age UK. "Despite recent progress, there are still significant numbers of older people living on very low incomes who would genuinely struggle to pay the licence fee if required to do so."

More than 50,000 UK pensioners could be pushed below the poverty line if the BBC goes ahead with proposals to scrap the free TV licence for the over 75s.[i] 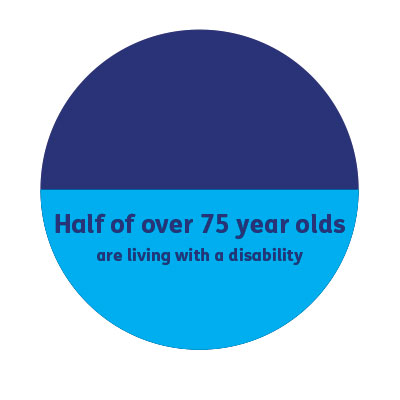 An additional bill of £150.50 – the current cost of an annual colour TV licence – will cause great worry and distress to hundreds of thousands of vulnerable pensioners who are already struggling to get by. Our research shows that more than 2 million over 75s will have to go without TV or cut back on heating and food in order to remain informed, entertained, stimulated and connected to the world beyond their doorstep.

Added to this, half of over 75s are living with a disability. Many of them rely on their TV for companionship and entertainment. And for those who don't have the internet – a considerable proportion of the oldest in our society – TV enables them stay up to date with what's happening in the world.

"Television is my saviour, especially on the days when my illnesses flares up and I have trouble walking or using my hands. To someone still able to work it may not seem like a lot but £150 is an enormous amount of what I get per year. I sighed with relief at 75 when I didn't have to pay for a TV licence anymore - this just feels like a real kick in the nether regions."

Why means testing isn't the answer

In June 2019, the BBC announced plans to means test the free TV licence. Means-tested benefits, which take into account how much money someone has, can make a big difference to people's lives. But that doesn't mean that means-testing is right for every type of benefit. And we don't believe it's right for TV licences.

The BBC plans to means test older people for a free TV licence by giving it only to those who receive a benefit called Pension Credit. But we know that two fifths of people who are entitled to this benefit – about 1.2 million pensioners – aren't getting it. We also know that those 1.2 million pensioners are the very poorest in our society. Many simply do not know they are entitled to it, or really struggle to complete a very complex application process which requires a lot of financial and personal information. For many, there's also a real stigma attached to accepting help.

It's also important to consider the people who are just above the threshold for means-tested benefits.

Many have struggled throughout their working life to save a little extra for retirement. They thought they were doing the right thing. But that small pot of savings for a rainy day means they don't qualify for those benefits. Other people might, on paper, appear to have enough money to live on, but face high costs related to things like disability and illness. For these people, age-related concessions like the free TV licence can make a huge difference.

Worried about money or the impact losing your TV licence could have?

Again and again, the point we're hearing at Age UK is that television means much more than simply entertainment. It's a friend, at a time in life when many people find human company harder to come by.

One man, who has lost his wife of 57 years, told us that without TV he "would not cope with life." A widowed woman in her 80s described herself as "worried sick" at the thought of having to pay the £150 licence fee, saying: "I rely on my TV for company so I don't feel so alone."

A couple in their 80s, both living with limited mobility, summed up the sad reality that many older people - and those who care for them - are now facing: "The TV brings comfort to us, in what is becoming a lonely world."

It's for these people that we need to act.

"I work in adult social care and see the profound detrimental impact that social isolation can have on older people. Over 75s don't ask for much, and can be a very forgotten group in society. TV is a lifeline, a friend, a means of feeling part of the wider world. Please don't take that away."

Together with organisations across the country, Age UK is petitioning the government to take back responsibility for providing free TV licences for over 75s. We need as many signatures as possible to make our case and show how important this issue is.

Complete a paper copy of the petition

Just download and print this form and send it back to us using the Freepost address provided.

[i] Age UK calculation based on data from the Family Resources Survey, January 2019 – the exact number is 51,041 adults aged 65 and older. This includes all people aged 65+ living in households with a person aged 75+ and which therefore currently qualify for a free TV licence.