The Wireless DJ Gary Williams on how he made it from working men’s clubs to the West End stage.

How did your singing career get started?

I wasn’t trained as a singer. I started doing amateur dramatics in Grimsby when I was 19, then I started singing in working men’s clubs. I was lucky enough to come across a man who decided the only way to help me was to hire Hull City Hall, hire the BBC Big Band and tell them the only way they could get the gig was if they let me sing with them, which they did. A few weeks later I was with the band on Pebble Mill, and I met the broadcaster David Jacobs who became a great friend.

Touring in Japan was a challenge as the culture is so different. The audiences are very polite – they don’t whoop and cheer, which can be slightly off-putting when you’re expecting a more raucous response! 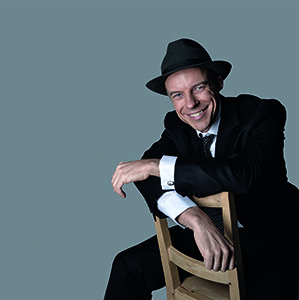 What have been your career highlights?

I was in the Rat Pack in the West End; I recorded my first three albums at Abbey Road; and I did a benefit concert at Buckingham Palace for The Prince’s Trust, which was a great thrill. Never a day goes by that I don’t feel grateful for my luck – I love what I do.

Who has inspired you?

The most important figure in my career was David Jacobs, who went out of his way to help me. I’ve met Tony Bennett a couple of times; he has always been a great hero of mine. And Burt Bacharach was very interesting and a very nice bloke to work with.

What advice would you offer to someone thinking about a career in singing?

The first thing they should do is get my book, Cabaret Secrets! Seriously, if you want to be a singer, just get out there and do it. Sing as often as you can because one thing leads to another – if I hadn’t been singing in working men’s clubs, I wouldn’t have sung at Buckingham Palace. I run a free cabaret masterclass in London to share what I’ve learned. I know how difficult it is when you’re starting out – if I’m able to help and encourage people at the beginning of their careers, that the most satisfying thing I can do.

Each week on his show on The Wireless, Gary picks songs from artists who have performed in some of the biggest venues in Vegas. ‘The great American songbook is a beautiful body of work,’ he says. ‘It’s enduring because the songs are so well written and so well produced by such incredible talents: Bobby Darin, Ella Fitzgerald, Dean Martin, Peggy Lee, Lena Horne… I’m passionate about sharing this music with the people who listen to The Wireless.’

The Legends of Las Vegas (Thursday, 7pm) is not the only specialist music show on The Wireless. Listen out for:

Listen to Gary on The Wireless

You can listen online at thewirelessradio.com, on DAB radio in the London area and via The TuneIn app for phone or tablet.

Read more articles from the Spring 2017 edition of Life magazine.