Liz Kidner had always wanted to research her family tree. When she did, she got the surprise of her life.

Many people put off drawing up a family tree because the prospect seems like such an arduous task, but, as Liz Kidner discovered, a few simple steps can lead to incredible discoveries.

Liz became interested in drawing up her family tree when a friend showed her the progress he’d made finding out about his family tree on a website. She’d always had an interest in finding out a bit more about her family, as her father had been married before meeting her mother and Liz knew that she had a half-sister out there somewhere.

Liz explains: ‘My husband put a few details into the website, and within six weeks we had an email to tell us that someone else was looking at exactly the same family tree, and would we like to get in touch with them? Of course, the answer was yes!’

Liz and her husband waited with bated breath for the reply, and eventually Sue got in touch. ‘Sue told me that she believed she was my half-sister,’ says Liz. ‘I was elated and totally blown away! It had all happened so quickly.’

The additional surprise was that this wasn’t the sister she’d been told about: Sue came from another partner that Liz’s father, a squadron leader in the RAF, had during the war before marrying her mother in 1951. ‘After Sue and I spoke on the phone we planned to meet and began to piece it all together. It didn’t matter a jot that she wasn’t the half-sister I was looking for!’ 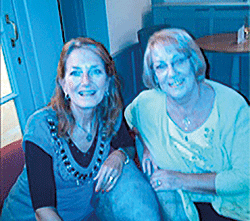 There were more surprises in store for Liz, as Sue revealed she had a brother: Sue had a lot more family than she thought. ‘Sue couldn’t have come into my life at a better time,’ says Liz. ‘In Sue, I have found a “soul sister”; we have so much in common and we both have the gift of the gab!’

The timing was right on another, significant, level too. ‘My mother had just been diagnosed with dementia,’ says Liz. ‘It has been a welcome distraction to have this wonderful new woman in my life.’

Liz explains that she won’t be telling her mother about the new family connections. ‘I don’t think I have the right to complicate her memories of Dad, who she had 21 wonderful years with.’

Drawing up a family tree is easy to do and can be so rewarding, both for you and for future generations. There are a few golden rules to bear in mind before you get started on your family tree.

Read more articles from the Winter 2016 edition of Life magazine.