Former Naval Officer Bill Mitchell, 71, is living testament that you’re never too old to do anything, although few of us might decide to take on the same awe-inspiring feats of endurance that he has! Bill recently completed the toughest footrace on earth – the Marathon des Sables, a 156-mile ultra-marathon across the Sahara Desert – becoming the oldest man to complete the challenge, a record previously held by Sir Ranulph Fiennes. He talked to use about what made him first take up running.

Bill’s story started in 2008. ‘I decided that in the winter, when it was quiet at work, I would go for a walk. I picked a circular walk to begin with. And on the flat bits I started jogging, and then I tried to jog all the way round, and once I completed that a few times, I thought I’d add a bit more.’

It really was as simple as that, he explains. ‘I suddenly got very involved in running and really got a lot of pleasure out of it.’

Running has been a joyful experience for Bill. ‘I started doing my running at 63 and it’s brought an unbelievable amount of respect from other people, enjoyment for myself and it has got me to places I would never have dreamt of going to.’ 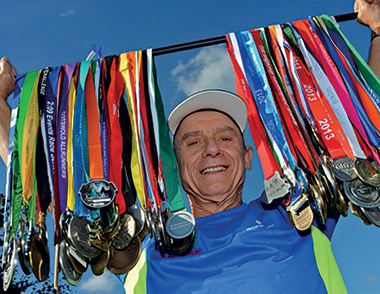 Bill quickly went from running around the block to running marathons. He ran his first full marathon at 65, and a whopping 32 in 2015. But his biggest challenge came in April 2016 when he took his place on the start line for the Marathon des Sables.

‘On the first day, quite a lot of people dropped out,’ he says. ‘At the end of it you had probably climbed 2,000ft of dunes – it was really hard going and a lot of people left the race.’

But, he continues pragmatically, there was no question he would join them. ‘You’re in the desert, on what’s considered to be the world’s toughest footrace, so what do you expect? It’s the toughest for a good reason.’

Bill is determined to persuade more people to improve their fitness. ‘I don’t mean go out and run a half marathon this weekend,’ he laughs. ‘But there’s no stopping you if you just take things in nice bite-sized pieces. So start going for a walk, if you fancy it.’

Bill has a mantra – and it’s a good one. ‘Never say you’re too old, you’re not – you just need confidence. You’ve got to make it happen; nobody will make it happen for you.’

If Bill’s story has inspired you to get out there and take up some exercise, read our tips on staying active in later life.

Read more articles from the Winter 2016 edition of Life magazine.