This Grandparents' Day, Age UK staff and volunteers pay tribute to the grandparents who continue to inspire them in their lives and work supporting older people.

Grandparents' Day (3 October) is a chance to celebrate the special bond between grandparents and grandchildren. While it will be joyous for many, it'll be a sad time for others too, as we reflect on the grandparents we've loved and lost. Here, Age UK staff and volunteers remember some very special older people and how they continue to inspire them every day.

Ever since I can remember, I worried about one day having to face a world without my maternal grandmother, Melita, in it. Unfortunately that’s been my reality for some four years now and some days can feel very sad and empty as a result. 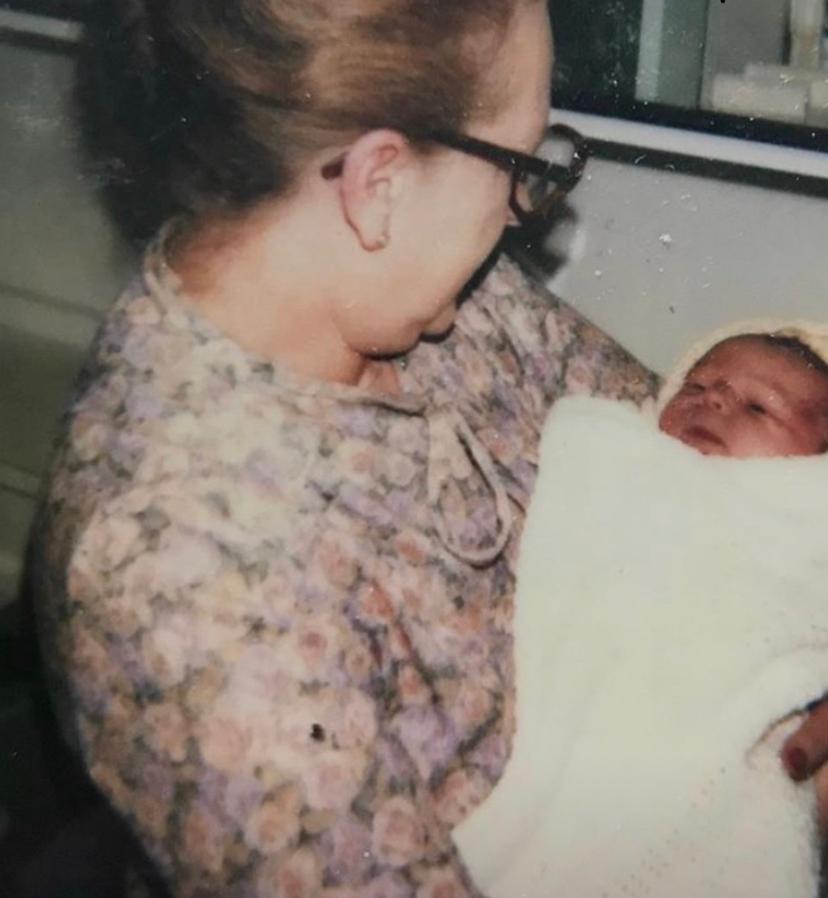 “Are you still working with the old people?” she’d ask me when I’d go and see her during her last few years. At that point she was in her nineties, so it was interesting she still considered age something that only happened to other people. But age’s rigours certainly took a toll on her, though the ways in which she dealt with them inspired me to work for Age UK and continue to inspire me today.

My nan was known to those close to her as ‘Tilly’. This wasn’t some derivation of the name Melita, but a nickname, after a dancer and choreographer named Tilly Losch, on account of the lively way my nan would kick her legs up as a baby. She danced competitively as a child and teenager and remained energetic well into her eighties, on her many shopping trips to nearby Brixton, where she’d worked for Lambeth Council until caring for her ailing mother meant she had to take early retirement.

She was the archetypal grandmother. She would forever be offering generous portions of food to my brother and I, and insist that anything we’d started would have to be finished in one sitting, despite us explaining that a tub of ice cream could simply be put back in the freezer. Who were we to argue with our grandmother, though, eh? She was also a ceaseless supporter of whatever we did. The moment I said I wanted to study journalism and write for a living, she bought me my first laptop; when, for a spell, I co-hosted a rock and metal radio show, she stayed up and tuned in, praising my efforts but describing the music she had to ensure between my chatter as the worst she’d ever heard.

The most admirable thing about my nan, other than the fact she lived her life entirely for other people, was a steel trap mind that retained so much information. It kept the more difficult elements at bay, too, which I attribute to her having lost a daughter, my aunt, very suddenly in 1997. My mum suggests it was my brother and I that got my nan through that exquisitely painful time. I hope that’s true because it would mean we were able to help her in the same way she helped us, with unwavering devotion. I never missed an opportunity to tell my nan I loved her and I wish more than anything I was still able to.

My grandad, Ernie, was a tough man in his younger days. But looking back it's telling that he would put on a full football kit just to have a kick around in the garden with me. This tells me he did have a softer side. After Iris, my Nan passed away – which broke his heart – he changed a lot. 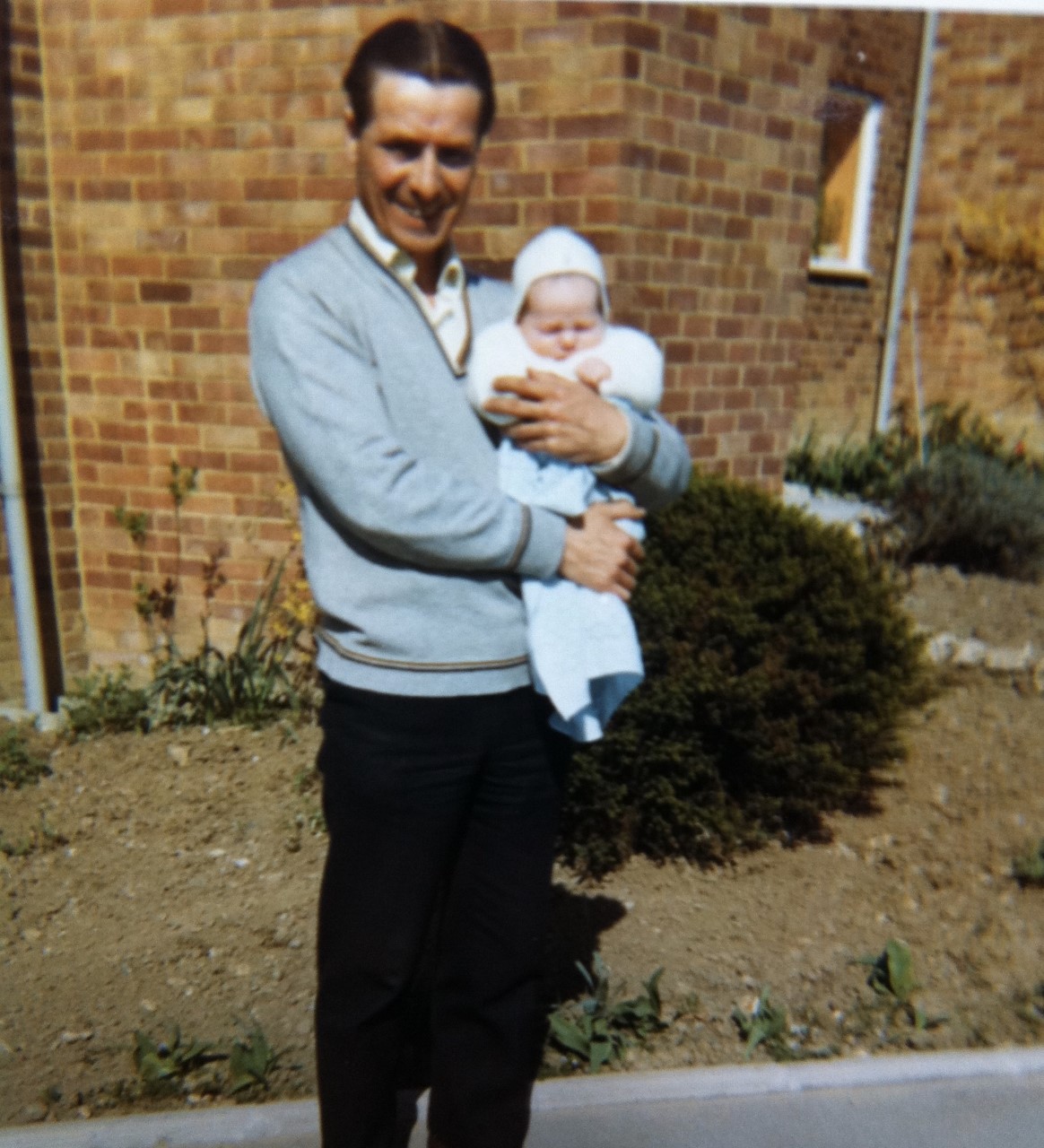 I was so proud of the way he conducted himself. His sense of humour was wicked and playful. He would greet me with a huge cuddle and a shout of ‘HELLO SON!” when I arrived and immediately make me tea and toast no matter what the time of day (or if I even wanted tea and toast). He told me constantly how proud he was of me.

He became a decent cook and some of my happiest memories are of us making him little shepherds pies for his freezer or him serving up a big roast. He'd often ask me: ‘’How is it…?” before the first mouthful was even finished.

Doing simple things like the hoovering were fun with him. He often followed me around for quality control purposes. My mum and I really loved doing anything we could to set him up for a week where watching cricket could be his main focus.

I never wanted him to feel isolated so I would phone him at different times each day, or even better, halfway through a football match so he could update me on the score. He would often put Ceefax on – Google it, kids – and read me a whole day’s results, including goal scorers and bookings. He used to love talking about modern ‘’pampered’’ footballers, and fans, and how in the old days at Arsenal the players would often bring out oranges and throw them to the kids in the crowd, which was a real treat.

I miss him terribly and thinking about him, and how our relationship got stronger over the years, inspired me to volunteer for Age UK. I went from being nervous about each call, to looking forward to them. Building a genuine friendship over the weeks is a great feeling. To share the news of their week is a privilege and I get as much from it my phone friend does. I get a chance to sit down, turn off the background noise and focus on someone else and that doesn’t happen enough in a world where we have so many things constantly demanding our attention. 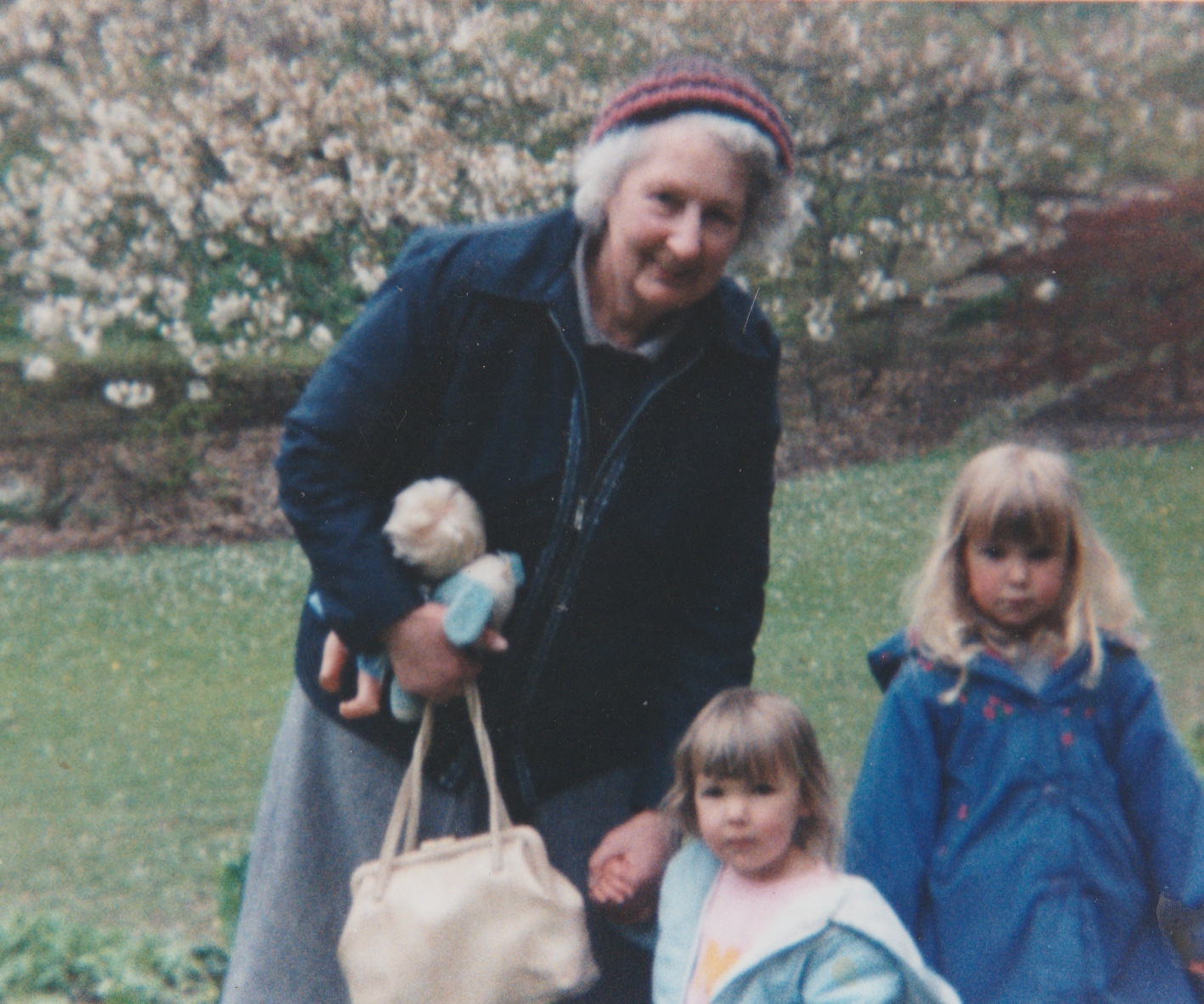 Granny had a huge heart and was a big part of my life. She died nearly three years ago, a week after her 95th birthday, but I still miss her dearly and think of her daily. She was always seen in a woolly hat, whatever the weather. She was a keen knitter and happily took part in the Big Knit, as well as knitting for her family members overseas. She supported many charities and always told me how proud she was that I worked for Age UK.

We were lucky that Granny lived only a short distance from my parents, so we used to walk to her house regularly and our favourite route was through a rather overgrown hedge and down what became known as ‘Granny’s Secret Path’. She was always pleased to see us and would let us choose a chocolate or sweet from her special tin regardless of the time of day we called in, and I still treasure that tin today. She loved gardening and liked to use her spade as a walking stick to balance her in her later years. We used to pick apples and blackberries together at this time of year and I still use the basket she made for it today. She was a great cook, and homemade crumble and custard was one of her signature dishes. I like to think I’ve inherited her green fingers but my cooking’s still a work in progress! 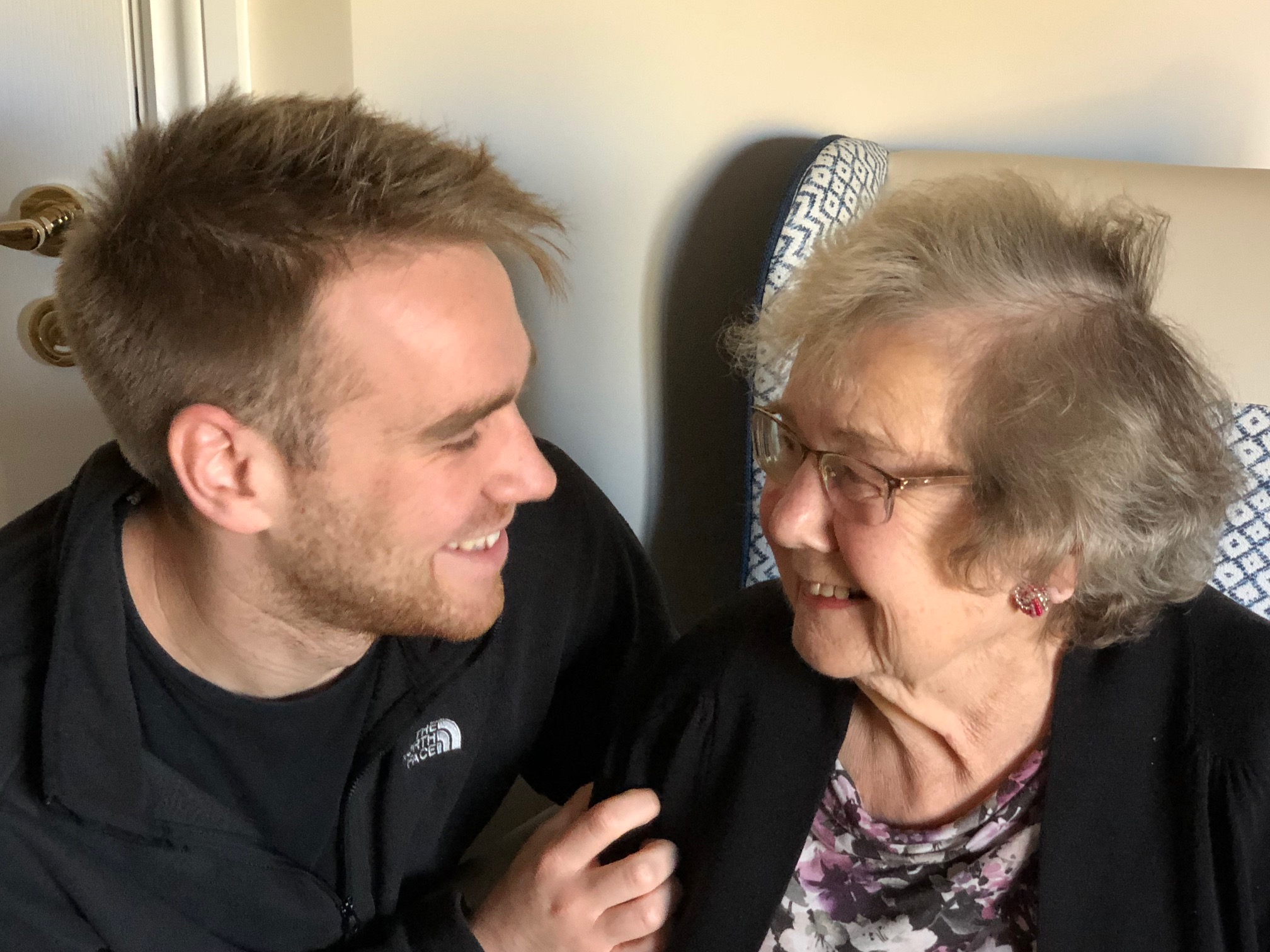 Me and my grandmother, June, always had what felt like a special relationship. When I was just a boy, I took full advantage of this. When mum and dad said "no", off to Nanny June I went, safe in the knowledge the "yes" I was after was just a cheesy grin away. It was nearly always about food, and her argument was always the same: "But he’s a growing lad!" Initially, this was true, but she applied this logic well into my twenties, when I’d already settled at a very average 5 feet 9 inches. I’ll never know what I loved her for most – the 20-plus years of extra food or the unwavering optimism that my growth spurt might still be on its way!

She was a remarkably strong woman. By her mid-teens, she had already lost both of her parents and, as an only child, went to live with her aunt and uncle. This strength and resilience was something she would display throughout her life – continuing to work into her eighties, and caring for my grandfather for many years as he lived with Alzheimer’s disease. In 2017, thirteen years after her beloved husband had died, she was diagnosed with Alzheimer’s, too.

She stopped work and moved into sheltered accommodation. I used to go and visit her after work when I could. Our special relationship changed. She was still Nanny June – but now we were adults that enjoyed each other’s company. We were friends. I used to call her and let her know I was heading up to see her. When I’d get there, I’d ring the bell and wait to see her silhouette through the frosted glass and then her face as she opened the door. It quickly became the best part of my day. We’d sit and chat and – of course – share snacks and cross our fingers that I’d be 6 feet tall when she opened the door the next day.

As her memory worsened, conversation was often harder. But on those days, we had Dean Martin and Frank Sinatra to turn to, as she never forgot their songs. We’d sit, hold hands and sing the words to song after song. One day, she stopped singing, turned to me and said, "I used to dance to this with your grandad." I asked if she remembered how and – before I knew it – we were dancing around the living room floor.

My grandmother is the reason I work at Age UK. I applied not long after she was diagnosed. My memories of her final years aren’t all as idyllic as us dancing. Things were often difficult as the condition progressed and her health worsened. But I decided then that I’d remember and cherish those moments – the good and the not-so-good – for the both of us.

Grandad Vic was always a rule-breaker – from bringing me brown paper bags of pear drops when my mum was trying to limit my sugar intake, to stealing an old gas lamppost to decorate his garden with. His mischievous ways taught me to challenge the status quo and forever live life to the fullest. 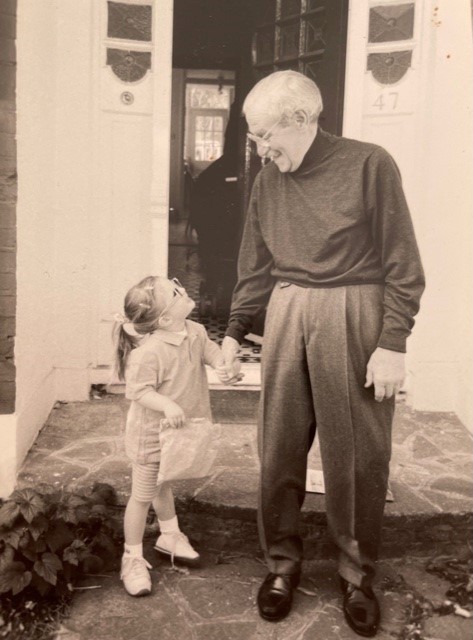 When he wasn’t being the dedicated grandad doing the nursery run, he was a dedicated, hard-working, humble entrepreneur who would get up 2am to take his fruit and veg stall all over London, right up until the week that he passed away. His charm and wit proved a hit with his loyal customers, and he'd forever tell us that “manners cost nothing” – a lesson that I have taken into both my personal and professional life.

I wear my gold coin necklace, made from his coin collection, as a reminder to work hard and be kind to everyone, while adding a pinch of cheekiness and humour to proceedings. I only got to spend 5 wonderful years with you Grandad, and miss you lots but I know you’re always watching over me.

Join us to pay tribute to the fantastic grandmas, grandpas, nanas, grandads and grandparent figures in our lives. Add a special memory of your loved one by sharing your stories, pictures and thoughts to our page.