Hear older people talk about their experiences of loneliness and how Age UK's befriending services have helped.

Age UK can help you if you're feeling lonely or isolated. Find out more about our befriending services.

How Len and Ivor became friends through Age UK

92-year-old Len got in touch with his local Age UK to enquire about their befriending services and is now visited by volunteer befriender Ivor.

In this video (above), Len and Ivor talk about their growing friendship, and how Age UK's befriending service has made a difference.

They spend an hour each week chatting about a range of topics, and they have developed a strong friendship.

92-year-old Joseph from Sandwell, near Birmingham, was referred to Age UK by a local community officer after his wife of 64 years died. Even though Joseph felt he didn't need any help, Age UK refused to give up on him.

Someone from Age UK Sandwell went to meet Joseph and see how he was. Although his general mental and emotional wellbeing was clearly very low, Joseph didn’t really want anyone to come and visit.

Age UK then arranged for a friendship scheme coordinator to visit Joseph twice more and eventually persuaded him to give befriending a try.

Derek started to visit Joseph and they hit it off almost immediately, finding lots of common topics to chat about. He now visits Joseph every week for at least 2 hours and they’ve been able to go on trips together occasionally, too – such as the National Memorial arboretum.

Age UK Sandwell also arranged for Joseph to visit the local lunch club and he's made some new friends in the area. Plus, he’s started gardening again, with a little kickstart from Age UK Sandwell’s gardeners who helped clear the undergrowth - this has also lead to trips to the local garden centre with Derek.

Joseph doesn't really like admitting that he was lonely - he's a proud man who fought in WW2 and is highly decorated.

He says now that he was too embarrassed to admit he needed help and friends and is extremely grateful to Age UK Sandwell who ‘refused to give up on him’.

Do you know someone who'd like a weekly friendship call?

Christine's story: 'I literally owe my life to Age UK' 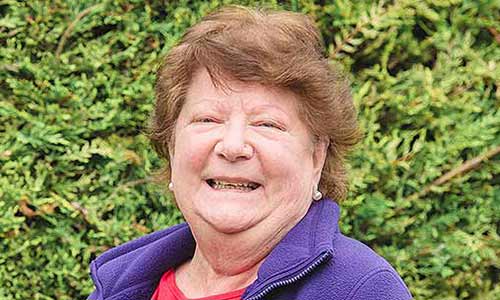 Christine Mayne lives alone in a small, but beautifully maintained bungalow a few miles outside Cambridge. One Christmas, a chance visit from her local Age UK saved her life.

At 65, Christine is far from what many might consider to be old. But multiple conditions, not least the challenges presented by living with only one kidney, mean she relies far more on the help and kindness of others than most. Never was that help more timely than a couple of days after Christmas in 2013.

Already part of Age UK Cambridgeshire's befriending service – Age UK staff member Kirstine visits her every week, no-one was due to be calling on Christine for a few days immediately after Christmas. But Kirstine happened to be in the area and decided to drop in.

The Christine who opened the door was a shadow of the normal bubbly, vibrant character Kirstine had spent so much time with in the months before. Her eyes were unfocussed, her speech was slurred and knowing that her conditions meant Christine didn’t drink, Kirstine knew immediately that something was seriously wrong.

'Thanks to Kirstine, I was taken straight to hospital,' says Christine now.

My doctor told me that if it hadn’t been for the fact she just decided to pop in and see me and then acted so quickly, I’d be dead. I literally owe my life to Age UK.

'My doctor told me that if it hadn’t been for the fact she just decided to pop in and see me and then acted so quickly, I’d be dead. I literally owe my life to Age UK.'

While not every relationship Age UK has with the people it helps is quite so dramatic, the help and support Christine gets from her local Age UK is typical of the close bond many people have with the charity. And those friendships mean just as much to the Age UK staff and volunteers.

'We’ve become real friends over time,' says Kirstine. 'I genuinely look forward to coming to see Christine. We have a really good laugh when we get together and it’s fantastic to know that being here has such a positive effect.'

Christine is in no doubt how valuable Age UK is to her. She has family who don’t live too far away – but still far enough to mean they can’t be with her every day or even every week. In all other respects, Christine is alone and the care and support she gets from Age UK gives her a real boost in confidence.

'It means I know someone is looking out for me – someone certainly had an eye on me last Christmas,' says Christine. 'If I need help or just advice or a chat, I know I can turn to Age UK and I know that I’m not just another person on a list – I really feel like they care about who I am and they’re interested in me as a person.

'I can’t get out and about as much as I’d like and although I have friends in the street where I live, Age UK gives me a different set of friends and things to do. I really couldn’t live without them.'

Find out more about