The Disconnected Mind is a research project that aims to discover how our thinking skills change with age, and what we can do to protect our cognitive health in later life. The project is funded by Age UK. 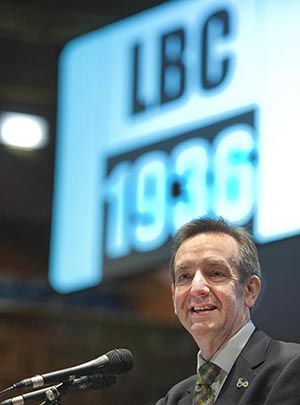 Losing our thinking skills is one of the greatest fears about ageing. We don’t know why it happens to some of us but not others. The Disconnected Mind project aims to find out. Ultimately, that knowledge will help us to protect our cognitive health as we get older.

In June 1947, over 70,000 school children aged 11 in Scotland took an intelligence test as part of the Scottish Mental Survey. The test measured their cognitive abilities in a consistent and replicable way.

Half a century later, Professor Ian Deary and a colleague re-discovered the results, sparking The Disconnected Mind project. Today, many of the ‘children’ who took the test in 1947 are at the heart of the research. Now adults in their 70s, over 1,000 joined the project at its start in 2004.

Professor Deary explains: ‘Access to childhood IQ data for people in their 70s is rare. It presented an exciting and valuable opportunity for studying cognitive function in older age because we know what IQ point these participants started from.’

At age 70, the participants, known as the Lothian Birth Cohort 1936 (LBC1936), re-took the 1947 test, took other cognitive tests, and contributed extensive additional information. The testing is repeated every three years, at ages 73 and 76 so far. A fourth round will start in late 2014. Brain scanning was added from age 73.

All these data allow the research team to discover what factors affect how well or poorly our thinking skills change with age – skills like memory, reasoning, processing speed and spatial ability.

We asked Professor Deary more about the extraordinary work he and his team are doing.

How are the members of the LBC1936 tested?

‘Every three years, the members come to the Wellcome Trust Clinical Research Facility at the Western General Hospital at the University of Edinburgh for about five hours.

‘They take 16 different cognitive tests. They have several medical tests, blood samples are drawn for genetic and biological testing, and their physical and sensory functions are tested. Most also agree to the brain scans; these take another few hours on a separate day.

‘They also help from home. Before each clinic visit, they complete a large questionnaire about their personality, quality of life, diet, habits and day-to-day activities.’

How have they responded to the testing?

‘They’re very committed and proud to take part. We often hear that their spouses who were born in a different year are a bit jealous that they can’t be involved.

‘The participants benefit as the wide range of testing acts rather like an MOT, and we couldn’t do this important research without them.  It’s a two way street. We feel very privileged to see them and it’s their project as much as ours. ‘

Looking ahead, what do you hope to achieve through the project?

‘We are trying to find out what factors – be they lifestyle, genetic, physical, biological, environmental or other factors – protect thinking skills as we age, and what are the risk factors for cognitive decline. Through the brain scans, we can see what is happening to the structure of the brain itself, and work out what influence that has.

‘So far, we’ve learned a lot from studying the LBC1936 from age 70 to 76, but we want to go on because, the more times we test, the more we will learn about how and why the brain changes in our later years.’

Could prevention of cognitive impairment or dementia result from the work?

‘Understanding brain ageing will give us a rational basis for the future design of new ways to prevent and treat age-related cognitive impairment.

‘Understanding normal cognitive ageing, and why some people’s thinking skills decline with age, was the first aim of The Disconnected Mind project. It’s important to study the period of cognitive decline before dementia.

‘The LBC1936 members all started out at age 70 with ‘healthy’ brains. Unfortunately, some will develop dementia during the study, though that’s a small group at the moment. Sadly, the number is likely to grow but this will give us the opportunity to study the changes that lead to dementia. I hope our findings will suggest new avenues for research to alleviate this awful condition.’

What could your research mean for society?

‘Let’s look at another example. Blood pressure is a common problem among older people. We know from past research that high blood pressure causes strokes. So, if you can lower the blood pressure in the population by a relatively small amount, you can prevent a large number of strokes.

‘It appears from our results so far that a lot of risk factors for cognitive decline are environmental factors, relating to our lifestyles. It gives you hope that these things can be remedied.’

Have you been surprised at how much The Disconnected Mind project has developed?

‘I didn’t think it would grow like it has at all. Age UK’s funding of the LBC1936 studies has acted as a springboard from which we’ve been able to extend the work with support from other sources, for example on genetics. We now have a leading position in the world on the genetics of cognitive ageing.

‘Beyond that, dozens of collaborators from Edinburgh, the UK and around the world are using the data we collect from the LBC1936 in their studies. So the LBC1936 is not only helping us with cognitive ageing but also contributing to a wealth of additional age-related research, on conditions relating to blood clotting, on the immune system and on eye health to name just a few.’