Come dancing and get fit

Want to up your exercise levels and have fun at the same time? Why not start dancing? Nick Smurthwaite talked to some enthusiastic participants and found out more...

Of all the performing arts, dance is the one that has emerged as the most therapeutic when it comes to staving off the mental and physical ravages of old age.

Luckily, it is also the simplest... and the cheapest. All you need is a clear space, some inspirational music and the ability to move around to it.

Even better than dancing in the privacy of your own home, however, is finding a local dance class to attend, where you could be introduced to different steps and styles, as well as making new friends.

In a class of its own

Recently I attended a weekly class in Mill Hill, North London, supported by Age UK Barnet and run by the bubbly Italian-born choreographer Simona Scotto and saw for myself the invigorating effects on its participants.

Without Simona’s gentle cajoling I doubt very much whether any of the 60- and 70-somethings in the class would have attempted the hand jive, the Charleston or the cha-cha-cha at home.

But it was clear that Simona’s choice of music – Tequila and Hot Hot Hot to name two tracks – and her step-by-step instructions provided equal measures of fun and challenge for the class of 12 ladies.

Anyone who has tried line dancing or the Charleston will tell you it is not something you can make up as you go along.

'I enjoy the social side of it as much as the dancing,' said 77-year-old Rose Mitchell, who suffers from osteoarthritis, although you wouldn’t know it from the enthusiastic way she joined in all the dances.

Another member of the group, 64-year-old Naheed Akbar, who suffered a stroke 6 months ago, said the class had helped her to regain her balance and coordination.

'I do make them work hard but I love to see them improving week by week and getting stronger,' said Simona, who runs a number of other classes in north London, as well as her own company, Counterpoint, for the over-55s.

She told me she has one 85-year-old man who comes to one of her classes and is happy to learn and try anything.

'I don’t believe in people saying they are too old to dance,' she adds. 'You are never too old to learn something new. I want to change people’s lives through what I do.'

Not all dance classes are just about exercise and fitness, though. The Company of Elders (left), made up of enthusiastic amateurs, was set up 20 years ago by the world-renowned Sadler's Wells theatre and is now good enough to give performances at home and abroad.

The dancers have the unique benefit of working with some of the country’s top choreographers, as well as being rehearsed every week by the indefatigible Simona.

Ballet-trained Sheila Dickie, who works as an administrator for the Company of Elders, believes dance is the best form of physical and mental exercise for people in later life because 'you have to concentrate when you’re learning a new dance and remember movements from one week to the next'.

Sheila has also taken dance classes to residential homes, on behalf of Age UK, and was struck by the positive response even by those who were virtually immobile.

Dance as therapy is not a new idea. In earlier civilisations, dancing, religion, music and medicine were all inter-connected. People danced in the Middle Ages to ward off the bubonic plague (although we're not sure how successful this was), while the wild tarantella dance of Italy is believed to have originated as a cure for tarantula bites.

Today our motivation to dance is simply to remain supple and have a good time into the bargain. Above all else, says Simona, her classes must be fun and non-judgmental. 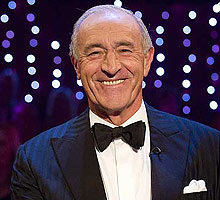 Len Goodman, the doyen of ballroom dance, who used to chair the Strictly Come Dancing panel of judges, also believes dance is the perfect way to combine exercise with enjoyment.

'If you’re married it's something you can share with your other half, and if you’re single it gives you an opportunity to meet other people,' he says.

'We're all living longer, so we have all got to be more active in the third age.'