100 year anniversary of the RAF

1st April 2018 marked the 100 year anniversary of the creation of the Royal Air Force (RAF). We look at some of the major milestones in its history, and touch on some of its key achievements.

The RAF was created on 1 April 1918 towards the end of the First World War – the first war in which air power played a significant role.

Prior to the RAF's creation, the air-borne divisions of the British armed forces consisted of the Royal Flying Corps, which was controlled by the British Army, and the Royal Naval Air Service, under the leadership of the Admiralty. However, the Smuts Report recommended these two flying divisions be merged to form the world's first air force independent of army or navy control – the Royal Air Force.

At this time, the RAF was the world's most powerful air force – with nearly 23,000 aircraft and over 290,000 personnel. An early success of the RAF was its shooting down of General von Richthofen (known as the Red Baron) in 21 April 1918.

The author of the report leading to the creation of the RAF, General Jan Christian Smuts said of air power, 'There is absolutely no limit to the scale of its future independent war use.'

Fighting for its survival

Flying in the face of this grand vision, the RAF was greatly reduced in size after the end of First World War due to defence cuts, shrinking from 290,000 personnel to 35,500. Moreover, there were many who questioned the continued need to have an independent air force, especially now the war had been won.

To challenge these calls for it to be disbanded and its duties returned to the army and navy, the RAF spent considerable energy keeping itself in the public eye, firing up popular enthusiasm for the exciting new possibilities of aviation. The first annual Hendon air show (which later came to be known as the RAF Display) took place on 3 July 1920. The RAF also supported a team for the Schneider Trophy air racing competition, and produced documentary films.

During the inter-war years while Britain still had a significant number of overseas colonies, many argued that air power was a more cost-effective way of controlling large territories than conventional land forces. Hence the RAF became the 'police' of the British Empire.

The RAF comes of age 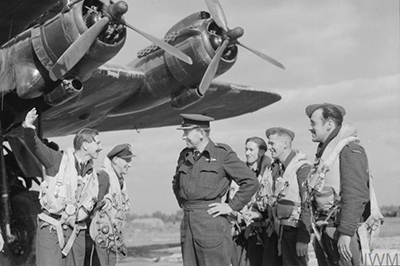 The RAF underwent rapid expansion in the run up to and during the Second World War.

In the Battle of Britain during the summer of 1940, the RAF held off the German Luftwaffe in what is perhaps the most prolonged and complicated air campaign in history. Of the heroics of the spitfire pilots involved, Prime Minister Winston Churchill famously said in Parliament on 20 August 1940, 'Never in the field of human conflict was so much owed by so many to so few.'

From 1942 onwards, Bomber command of the RAF mounted an ongoing strategic bombing campaign against Germany. One of the most famous episodes of this campaign, was the 'Dam-busters' raids in May 1943 where British Lancaster bombers dropped 'bouncing bombs' to blow up the dams of the Ruhr valley.

A history of innovation

During the Cold War (1947 – 1990), the main role of the RAF was to defend Europe against a potential attack from the Soviet Union, and it played a significant role in many battles, such as the Suez Crisis in 1956. Until the introduction of the Royal Navy's Polaris submarines in 1968, the RAF V bomber squadrons were the only military division armed with nuclear weapons.

From the 1950s onwards, many technological advances were introduced:

....However, it wasn't until March 1995 that RAF Balloon Command (originally formed in November 1938) was finally disbanded. This marked an end to over 100 years of balloons being used in British conflicts.

Alongside its military duties, the RAF has been involved in peace-keeping operations and humanitarian relief.

After the Gulf War of 1991, the RAF helped to enforce no-fly zones over Iraq, and between 1993 and 1995, it restricted airspace movements over Bosnia and Herzegovina.

During the Ethiopian famine of 1984-85, the RAF dropped food into affected areas. In more recent times, the RAF was dispatched to provide relief support following the 2004 Indian Earthquake and Hurricane Irma in September 2017.

1st April 2018 marks the 100 year anniversary of the RAF. This centenary will be marked by a series of events, culminating in a parade and fly-past on the Mall in London on 10 July. The closing event will be the Battle of Britain Airshow which will take place at Duxford on 22-23 September.

Find out more about RAF100

For more information, including details of key celebration events, visit the RAF100 website.