Sunday 11 November will mark 100 years since the end of the First World War, honouring those who lost their lives in the conflict. Here are some of the notable ways the centenary is being acknowledged across the UK, including the efforts of Age UK’s Joining Forces projects.

The service at the Cenotaph in Whitehall remains the centrepiece of Remembrance Sunday, and this year is no different. Members of the Royal Family, British political leaders and representatives from the Commonwealth will be in attendance. This year, President Frank Walter-Steinmeier will become the first German leader to lay a wreath.

Beyond the Deepening Shadow: The Tower Remembers 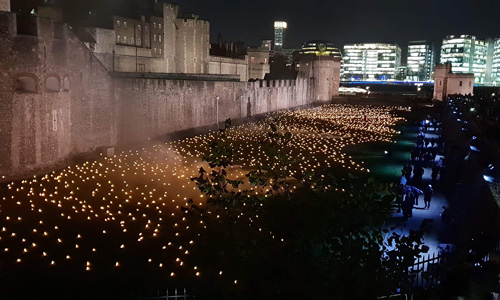 Beyond the Deepening Shadow: The Tower Remembers is a light and sound display at the Tower of London. Described as an ‘evolving installation’, at 5-9pm each evening, the Tower’s moat is lit by individual flames, and accompanied by a special sound installation and music.

They Shall Not Grow Old

Peter Jackson, the director of The Lord of the Rings trilogy, has made a new documentary that will provide one of the centrepieces of TV coverage around the centenary. They Shall Not Grow Old, its title taken from the Laurence Binyon poem ‘For The Fallen’ quoted on many war memorials, was made using footage, much of it previously unseen, from the Imperial War Museums’ extensive archive.

“We have transformed 100 year old film footage to see The Great War as the soldiers themselves saw it,” says the director in the trailer for the film, which can be viewed below. They Shall Not Grow Old will be shown on the BBC Two on Armistice Day, 11 November, at 9.30pm.

Pages of the Sea

They Shall Not Grow Old was commissioned by 14-18 NOW, a major cultural programme taking place across the UK to mark the centenary. A remembrance event at Roker Beach in Sunderland, produced by film director Danny Boyle, the man responsible for the spectacular opening ceremony for the 2012 Olympics, is part of another project for 14-18 NOW.

Pages of the Sea will take place on beaches across the UK. Over the course of several hours, a large-scale portrait of someone who lost their life in the First World War will be etched in the sand, to be washed away when the tide comes in. In the case of Sunderland, this will be 2nd Lt Hugh Carr, who was born in 1891 and died in the Ypres Salient in January 1916.

“Beaches are truly public spaces, where nobody rules other than the tide,” explains Boyle. “They seem the perfect place to gather and say a final goodbye and thank you to those whose lives were taken or forever changed by the First World War.”

“This will be a unique moment to say goodbye and thank you, together, to the millions of men and women who left their shores during the war, many never to return. Join us at one of the beaches around the UK and Ireland or take part online.”

You can see Danny Boyle discussing the project here.

Pages of the Sea takes place on 11 November. Find out more about it and discover a beach that’s participating near you.

The centenary will also be commemorated by Age UK’s Joining Forces project.

Joining Forces supports the wellbeing of older veterans. An older veteran is anyone who has completed at least one day of military service who was born before 1950.

Age UK has partnered with SSAFA, the Armed Forces Charity, to deliver 12 local projects across England; and many of them will be recognising the bravery and sacrifice of a previous generation of soldiers this coming weekend.

“11 November is traditionally a time to remember the fallen from all conflicts,” says Carol Elliott, Business Development Manager for Age UK Portsmouth. “However with this year being 100th anniversary of the signing of the Armistice signifying the end of the First World War we wanted to hold an event at Age UK Portsmouth’s Bradbury Centre remembering local heroes.”

“We decided on a Remembrance Tea event on 9 November, at 2pm and 4pm, to recognise local Portsmouth resident Sidney Day, who ran his own tea rooms called the Sidney James VC Tea Rooms. He was a corporal and on the 26 August 1917, while east of Hargicourt in France, he was in command of a bombing section responsible for clearing a maze of trenches held by the enemy. This he did – displaying incredible courage and remaining at his post for 66 hours under intense fire.”

Age UK Portsmouth is also part of the There But Not There project, a major nationwide art installation remembering the fallen, having been awarded four ‘Tommy Silhouettes’ by the Armed Forces Covenant Trust Fund. These form an emotional art installation at the newly refurbished Bradbury Centre.

“Having the Tommy Silhouettes will help us commemorate the centenary,” explains Carol. “As our veterans age it is important that future generations continue to give recognition to those who enabled us to live as we do today.”

“Cheltenham Racecourse is obviously a major part of Gloucestershire, and the whole of the November meeting, which takes place on 18 November, will mark the centenary of the armistice,” explains Helen Atkinson, Navigate Manager at Age UK Gloucestershire.

“We’ve been invited to have a stand in the inside area of the racecourse, to show people the work that we do and raise awareness of the programme. We’ve also previously worked with an actor, named John Bassett, who has written a book about a Gloucester family during the First World War called Somehow, Somewhere in France, so we’ll have some copies of that available.” But that’s not all. “On Remembrance Sunday, at the Everyman Theatre in Cheltenham, we’ll have a special performance hosted by Pam Ayres, featuring poetry readings and a brass band, for our local veterans.”

“We wanted to create something that all staff, volunteers, activity groups and visitors at the centre could engage with,” says Vicki Conroy, Business Support Officer at Age UK North Yorkshire & Darlington. 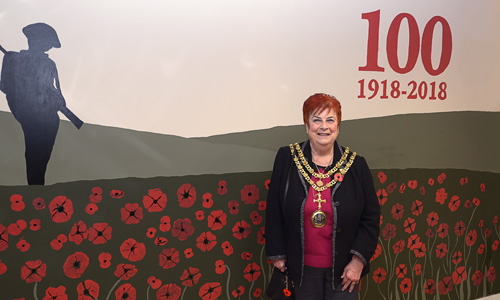 “Our writers group have written poems to commemorate the war and are at the side of the room, surrounded by around 180 stencilled poppies on the wall, each one done in remembrance of someone who died in the Great War. Our Veterans group, which meets every Wednesday, were invited to place the first poppies on the wall here. They have been placed by people of all ages – from the very young to a gentleman in his nineties.”

The mural was unveiled by Veronica Copeland, Mayor of Darlington (pictured).