To celebrate the festive season, we are sharing the Christmas stories of veterans from across the Age UK network. 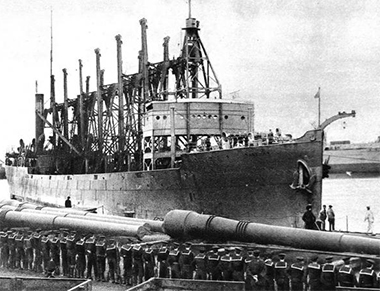 In 1914, the 'Santa Claus' ship USS Jason arrived in England packed with five million gifts for children in Europe.

Volunteers from our partner charity, SSAFA, the armed forces charity, were on hand to distribute them. 12,000 tons of gifts were donated by the American public to be distributed to children across the country who had either lost their fathers or whose fathers were wounded in the war.

Our new film highlights that for millions of older people, each day is much like the last and Christmas is no exception. If you've ever felt like this, Age UK can help.

Find out about befriending

For the past two years, Age UK Nottingham & Nottinghamshire has run a Christmas meal in conjunction with the YMCA.

Keith is a volunteer veteran with Forces Friends. He accompanied an older veteran who he visits, on his bus journey to the venue. Derek, the veteran, admitted that without having made an arrangement with Keith, he would probably not have attended but he was really pleased he did as he had a lovely time and found the people he met really interesting. 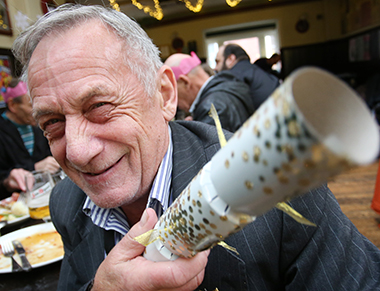 Charlie, 93, joined the army as a cook in the Army Catering Core when he was 18. He met his wife while serving in Germany. They spent 38 happy years together and had 2 children.

Unfortunately Charlie's son passed away when he was 53 and his daughter has dementia so isn't able to visit. Due to his own health issues, Charlie now struggles to go out on his own. Before Charlie got in touch with his local Age UK in Portsmouth, he had just one visitor, a neighbour who helps him with his shopping.

Charlie is now visited by Age UK Portsmouth staff three times a week. They help Charlie out with things around the house and are providing him with a befriender. Charlie always looks forward to their visits. 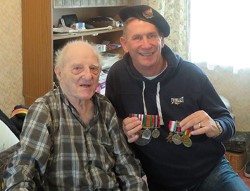 Whilst having a chat with one of the local Age UK Portsmouth staff, Charlie shared his love for football and that he supports Portsmouth FC. Age UK Portsmouth decided to arrange for former footballer turned manager, Alan Knight MBE, to visit Charlie. Charlie and Alan spoke at length, chatting about everything from serving in the army to the history of Portsmouth football club.

This Christmas, rather than having to spend the day alone, he will be joining a Christmas Day lunch in his area. 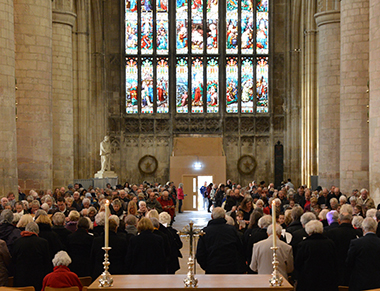 All of the older veterans involved in the Joining Forces Gloucestershire project were invited. Emlyn Phenah from our partner organisation SSAFA represented veterans and delivered the first Christmas reading and CEO of Age UK Gloucestershire, Rob Fountain, talked about the project and how thrilled we are to be partnering with our local SSAFA branch and supporting older veterans, not just at Christmas but throughout the year.

As part of Joining Forces, Age UK is partnering with SSAFA, the Armed Forces Charity, to deliver 12 local projects across England.

Find out more about SSAFA